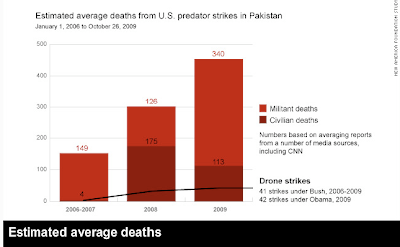 An interesting graph showing the ratio of civilian deaths to militant deaths from drone attacks in Pakistan (via). As with most things when it comes to Obama, the reality behind the numbers represents real difference between his presidency and that of his predecessors'. This decline in civilian deaths and apparent increase in enemy deaths caused by drone strikes indicates that before condemning drones outright as an inherently bad military technology (and there are other reasons to condemn the technology), we perhaps ought to consider the extent to which the way the technology is used matters. I would guess that after only nine months we could find lots of other statistical information on a number of fronts across the US government that show, all else being equal, similarly striking differences between the current and former administrations.

Right, that's still a high number of civilian deaths. But the graph here, if accurate, demonstrates some characteristics that distinguish Obama's approach. It suggests that Obama understands that you can't indiscriminately bomb your way to victory. Just because your enemies don't subscribe to the principle of non-combatant immunity doesn't mean that you can lift your subscription to the principle when it comes to anyone who looks like your enemy, let alone ignoring it in general. It took eight years to learn it, apparently, but indiscriminate killing and reinforcing beliefs that that's acceptable because your targets are "evil" is a sure-fire way to either lose a war or commit genocide.
...

Wait a minute.... This graph below says something quite different, at least about the first point raised above. Take a look and let me know what you think. 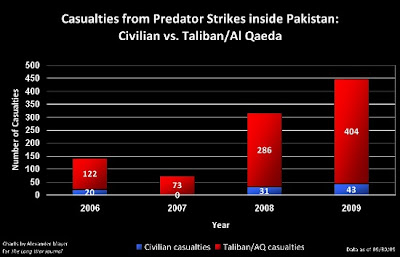 I'm afraid that these numbers will forever be dicey. I haven't looked at both links for the sources of the numbers, but everyone who might report them seems to have a dog in this fight.

And I'm sure that there are casualties that can be counted in either column, and many that nobody quite knows.

Cheryl is right. The reality is that no one knows what the numbers are. It's not like independent journalists are allowed into these remote areas to investigate. I would be skeptical of any numbers, much less trend analysis based off those numbers.