Unfortunately, for US farmers (via the Wege): 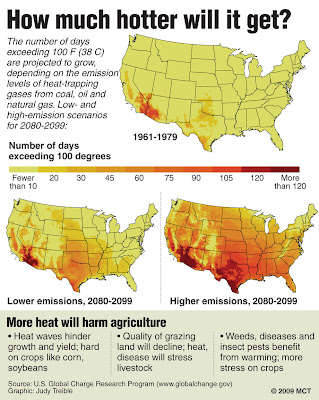 The thing is that farmers should understand quite possibly better than anyone else, life scientists included, the fact that nature's cycles operate on multiple spatio-temporal scales. They should understand better than anyone else how crucial it is, because it is of the essence of what they do, that planning over not simply the short-term but the long term is both vital to survival and fraught with potential error, external risk, and uncertainty. They know that knowledge of the natural environment, the land and water and flora and fauna, of complex systems of which human beings are a part, is always provisional knowledge regarding which claims to infallibility or self-certainty or putting things off until later - the claims of the Aesopian grasshopper - seals human fate. They know that human action can lead to ecosystemic collapse on relkatively immediate temporal scales and from which recovery might be impossible regardless of technological prowess. They know better than most people how human action is an ongoing feedback loop informing the conditions of the natural environment, which in return is an informational feedback loop to the farmer regarding how he/she ought to adjust her/his practices so that both survive. There's always the possibility that next year will be radically different than the current year.

The very reality of climate change and of human responsibilities and behavioral changes in response is something farmers should be able to get more than anyone else. I imagine many do. And I imagine it's a real moral struggle for these farmers in the face of potentially higher costs to themselves over the short-term. That's also obviously a matter of survival. But it's also true that agriculture in the US today is an industry managed in large measure from agribusiness office suites in Chicago skyscrapers.

That distance itself has served to convert the long-term wisdom of the farmer into the shorter-term focus of the industrial capitalist. I wonder about the extent to which this situation is a loss to us all.
Posted by helmut at 10:10 AM