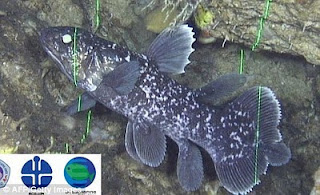 A baby coelacanth was captured on video for probably the first time. Coelacanths are felt to be a link between fish and the first fishy organism that crawled out of the water.

The American Chemical Society and American Institute of Chemical Engineers say that we need a transparent, comprehensive analysis framework (pdf) for proposed energy solutions and give some of the characteristics such a framework should have. I have been griping about this for some time. Everyone does their own analysis, which never quite can be compared with any other.

Seven hundred of those squooshy maps that show graphically the relative sizes of, well, seven hundred variables. Also some animations to show how things have changed over time.
Posted by Cheryl Rofer at 4:31 PM