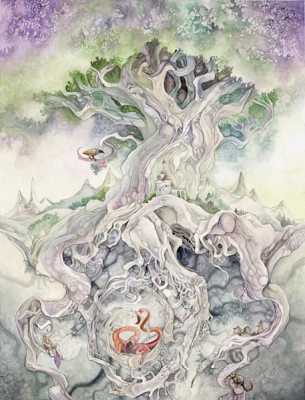 The big tree in “Avatar” immediately reminded me of Yggdrasil, the world-tree of northern myth, so it seemed a particularly bad idea for the Earthlings to blow it up. My connecting it to Ragnarök was a bit loose, at least according to Wikipedia. I had a vague idea that Yggdrasil was connected to Götterdämmerung. I’m not very good on the northern myths.

J.’s comment, though, got me thinking about how much of myth and legend is about the conduct of war and reintegrating warriors back into society. Looks like that’s been a problem for a very long time.

I’ve also been reading Alessandro Baricco’s reworking of the Iliad, which is about the conduct of the Trojan War; the Odyssey, of course, is about the warrior returning home. Here’s Achilles bandaging his friend Patroclus’s wounds. DADT. 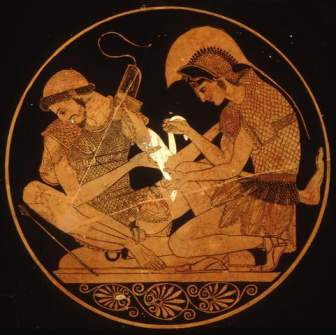 A friend suggested the war and return theme to me a number of years ago, when I was working through the Arthurian stories. It’s hard to see it in most of what we get as the Arthur stories now; Mallory provided a powerful filter, and he mostly liked the parts where one knight whacked another on the head, split his skull, and the brains poured out. 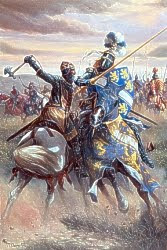 But before Mallory was Chrétien de Troyes, who wrote a number of novels a great deal more subtle. Mallory later tried to pull the work of Chrétien and others into a unity, preferring those bloody bits to others. And Chrétien writes largely about the relations between men and women, with return from battle a big part of that. His patron, Marie of France (pictured), daughter of Eleanor of Aquitaine, wrote novels herself. All this was happening during the Crusades. 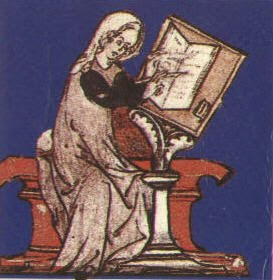 Eleanor, of course, was a very powerful woman. The responsible handling of power is part of the Arthurian stories and back further, as in the northern legend of the ring. And all this comes from oral tradition.

Lots to think about here, and I’m not going to unpack it all today. I do love trees, though. The one I’m currently using as an avatar is a big oak in Soomaa National Park, Estonia. Lots of lovely big oak trees in Estonia.
Posted by Cheryl Rofer at 12:04 PM