How Close is Iran To a Bomb?

MT and Helmut both asked me the other day to comment on Iran's enrichment capabilities and how close those capabilities may take Iran toward a nuclear weapon, if that is their intent.

Not only is that a good excuse for not doing calculations I don't like to do, I think that it's the best way to assess how close Iran might be to a bomb.

And, okay, I'll say a bit about enrichment, with some numbers.

Iran has been enriching its uranium at its Natanz plant to 3.5% U-235, which is what is used in most civilian reactors. The Tehran Research Reactor (TRR), provided by the United States under the Atoms for Peace program, uses fuel enriched to about 20% U-235. Twenty percent is somewhat arbitrarily set as the cutoff between reactor grade and weapons grade. But a bomb of 20% U-235 would need more than 400 kilograms of uranium, according to Wikipedia. Uranium is denser than lead, but that's about 20 liters volume, plus the conventional explosives to create the critical mass, plus detonators, timers, and a bunch of stuff. Too big for a missile or pretty much anything smaller than a truck.

The question, though, is how easy it is to get from there to some reasonable-sized bomb. There are various tricks that can be played to decrease the critical mass, but the unreflected values in the Wikipedia article are indicative enough for our qualitative consideration.

Taking the enrichment to 90% and above decreases the critical mass to something like 50-60 kilograms, much easier to work with.

Most of the "separative work," the work that goes into removing the natural 99+% of U-238 to enrich uranium, takes place in enriching from the natural 0.7% U-235 to 3.5%. So less separative work is needed to go to 20% and on up to 90%. That's why Iran is talking about a couple of hundred centrifuges to enrich for the TRR fuel, while they've been running several thousand to produce 3.5%. That's also why a small facility like Fordow, the one that was announced last fall, looks like a finishing plant that would do the final enrichment to weapons grade. The Manhattan Project used the enormous gaseous diffusion plants at Oak Ridge to produce a first enrichment, and then the calutrons to go to weapons grade. 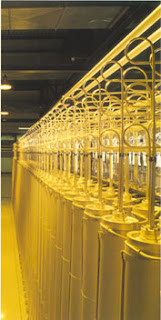 For the higher enrichments, the sequence in which material is fed into the various centrifuges may need to be changed. Two streams come out of a centrifuge: one slightly enriched and one slightly depleted. You don't want to throw away the U-235 in the depleted stream, though, especially if you're starting with a feed of 3.5%. I tried to explain that a while back, and I've stolen this photo from ISIS via my older post.

Those thin tubes on top of the centrifuges are the input and two outputs. They need to be reconfigured to go to the higher enrichments. If you really like repetitive math, you can find more of this kind of thing in a chemical engineering text on separations. It will be in the section on fractional distillation and theoretical plates, if there's not a section on separative work.

There's also a question of the separative work capacity of the centrifuges Iran has installed. That is the basis for calculating how long and how many centrifuges will be needed to get to weapons grade enrichment. Joshua Pollock recently summarized the best estimates of Iran's centrifuges, which are of an early and not-too-efficient design. Iran has made noises about a new generation of centrifuges, but they're not there yet.

Jeffrey Lewis gives an explanation that may help with understanding separative work. It doesn't particularly work for me, but it may for others.

For the bottom line, I'll go back to my quick answer to MT: Iran has been 3 to 5 years away from a bomb for a few decades. At Natanz, they have a capability that can give them the enriched uranium for a bomb. They will learn more by enriching to 20%. In particular, impurities will tend to collect in one or another fraction and can cause various problems. They will learn more about dealing with these problems. They need quite a bit more in the way of explosives, detonators, and timers to make a bomb. We don't know how far along they are in that. If they choose to get fancy, like the North Koreans seem to have, their job is harder.

Thanks, Cheryl. Gosh, though, if it was so simple, why didn't you tell us before?

So much seems to depend on top secret expertise--and remembering Klaus Fuchs, not to mention Robert Ludlum--that I have to wonder whether you worry of portraying yourself online as worthy of kidnapping. I imagine people at Livermore aren't allowed to blog about even what department they're in. Then again, I guess there's no harm in being targeted for seduction by attractive foreign agents, so long as you don't let things get out of hand. If you were to start posting less frequently, we all might have to say something.