Stephen Walt has an eerie piece today on how Tony Blair's testimony supports Walt's and Mearsheimer's thesis that the Israel lobby had a lot to do with setting up the Iraq war. He barely mentions that other country. But here's something to consider:

Finally, let's not forget that while the Iraq war has been a disaster for the United States, it has also been very bad for Israel, not just because its principal patron has been stuck in a quagmire in Iraq, but also because the biggest winner from the war was Iran, which is the country that Israel fears most. All of this shows that despite the lobby's openly-stated commitment to promoting policies that it thinks will benefit Israel, it did not work out that way with the Iraq war. 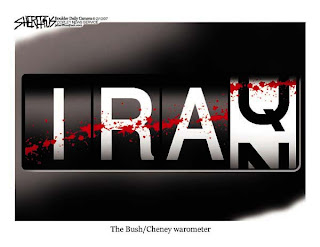