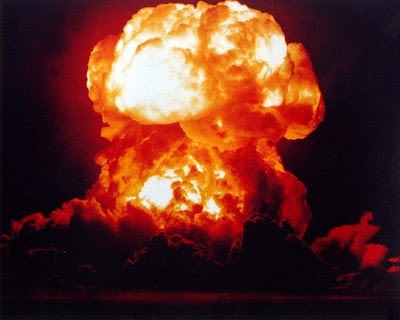 Jeremy Bernstein gives us a first-person description of an atmospheric nuclear test and observes that there are few left who have actually seen one. I know some of them, and what they say is very similar to Bernstein's description.

Harold Agnew, who flew in the observation plane over Hiroshima and was the third director of Los Alamos, has suggested that every ten years or so, world leaders be gathered together at some remote spot to witness an atomic explosion. The scale of these events is so far from that of ordinary armaments that it is easy to sink back into the feeling that they're just big bombs.

On the other hand, a friend has commented that she doesn't need to see one of these to imagine how terrible they can be. And I've never seen a test (although I have seen some of the results), and I can be horrified by it. But she and I are in the generation that was forced to think about it by air-raid drills in school. Even then I had doubts that huddling in the hall of the school was going to keep us from being vaporized, and they were what I thought about as I huddled.

The continued existence of anything accustoms us to it, blunts the strong feelings it initially evokes. Maybe that's even more of a reason to do what we can, now, to eliminate nuclear weapons.
Posted by Cheryl Rofer at 9:51 AM

whoops. commented to wrong post. i'll port it over.

In Bernstein's early books he reads like a groupie.

New here. I'm of your generation, Cheryl, so don't know if this is a valid suggestion for those who are younger and never saw a concentric-circle chart of percentage of destruction from Ground Zero... but how about putting a copy of "Hiroshima" into younger world leaders' hands? It's short, hideously gripping, and it's first-hand reporting. Once read, never forgotten.