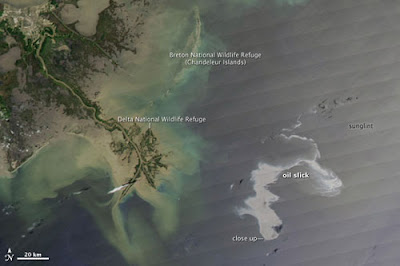 Amos estimates that the amount of oil leaking into the Gulf is more like 20,000 barrels a day -- four times the Coast Guard estimate, and 20 times what BP originally claimed. That would add up to about 12 million gallons of oil so far, making this spill worse than the 1989 wreck of the Exxon Valdez, which dumped 11 million gallons into Alaska's Prince William Sound -- one of the nation's worst environmental disasters. 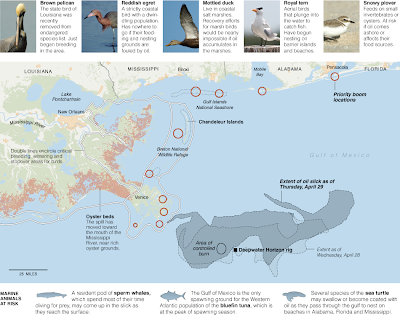 Credits: Erin Aigner and Haeyoun Park/The New York Times;
Bird photos by Bill Stripling, courtesy of The National Audubon Society
The oil spill has now reached shore in fragile Gulf Coast habitat near the mouth of the Mississippi River. What can possibly be said? It's a filthy industry, we consumers are addicts, and the only solution is a transition to renewable energy sources. That transition is occurring, but renewables won't be a full substitute before we'll have left even more casualties, from wildlife to local economies to deadly foreign policy to the poor and vulnerable affected most by climate change. Only a completely amoral idiot could say, "drill, baby, drill!"
Posted by helmut at 10:54 AM

I heard that BP is looking for volunteers to go help with the cleanup. Simply priceless. A for-profit company screws up in a phenomenal way, asks the US government for financial aid to clean up its own mess, and then asks for help from the public.

There should be a fund that all extraction industries pay into - a form of Clean-Up Insurance... and that fund should be financed out of their profits.

Time and time again corporations will spend the bare minimum to comply with regulations, and clearly the regulations don't go nearly far enough. And now the FBI is investigating the agency entrusted to enforce the mine safety regulations. Hat-trick!

That's the good old American version of capitalism, Peter. Take the profits and let the suckers, er, taxpayers take the loss. Seems to me that just happened in another industry...