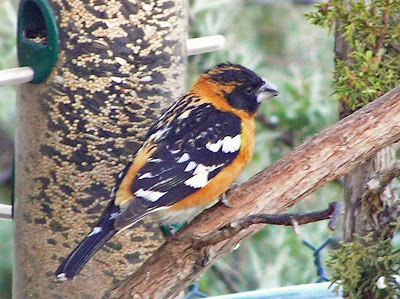 I've had an unusually wonderful mixture of birds visiting my feeders lately. This week the black-headed grosbeaks and western tanagers arrived. They seem to be in family groups; the scruffy feathers and the amount of white on this grosbeak suggest a young male. A couple who nested nearby last year produced a male, but I think I've seen two other adults as well. The tanagers include at least two females, maybe three. Either last year's progeny, or that male is some guy!

Two or three starlings have stuck around from the winter, and there have been as many as ten mourning doves in the yard at a time. They seem to be in groups of three, so I am wondering if some are already this year's children. We had quite a few Asian collared doves over the winter, and white-winged doves, but now it is almost exclusively the mourning.

In the same color range as the grosbeaks are the rufous-sided towhees; a Say's phoebe calls but doesn't often show, and there were three chipping sparrows the other night on the ground, as the grosbeaks and tanagers hogged the tree.

Add in various hummingbirds, pine siskins, and, just this week, lesser goldfinches, and the yard is very colorful.
Posted by Cheryl Rofer at 1:03 AM