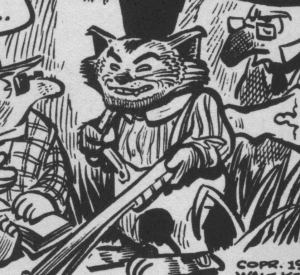 This week brings a small confirmation of my theory that Barack Obama is applying community organizing principles to his presidency. In community organizing, you need to get the people to police themselves. To call BS on those who want to take advantage of them. The rapid denouement of Andrew Breitbart's lies in the Shirley Sherrod matter seems to be an indication that people, the news media, and the government are getting a bit smarter about rightwing deceptions.

Flory, at Whiskey Fire, also sees a microscopically chromed lining to this cloud, and James Fallows (prematurely, I fear) sees a "Sir, have you no decency?" moment. (Simple J. Malarkey drawing from here, where there is a further explanation.) Although these two don't put it in the community organizing category, they are talking about the same sort of thing. Part of the dynamic is that the changes become clear to more and more people.

Meanwhile Ezra Klein is undercutting Tucker Carlson and his minions who are spinning out new "discoveries" from their stolen Journolist archives. No, none of the Phron crowd were on it, so you'll have to wait a little longer for our denouement.
Posted by Cheryl Rofer at 7:53 PM