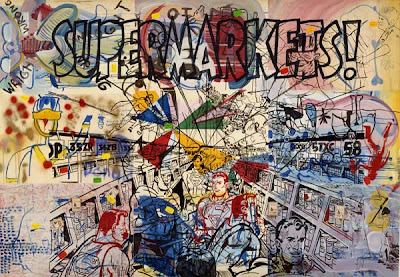 I would be remiss to myself not to acknowledge the passing of German painter Sigmar Polke last month (h/t High Low and in Between). In my own short-lived moment as a painter nearly two decades ago, Polke and his colleague Gerhard Richter, through whom I came to know Polke's work, were probably the largest influence on my work as, paradoxically, a central reason for why I moved away from painting. But saying more about this technical issue is irrelevant here. Polke found ways to parody both the social realism of the East and pop art of the West and it's this political anti-dualism that I found particularly attractive.

Polke's ideas and experiments, curmudgeonly modesty, and easy wit will be greatly missed.
Posted by helmut at 6:47 AM