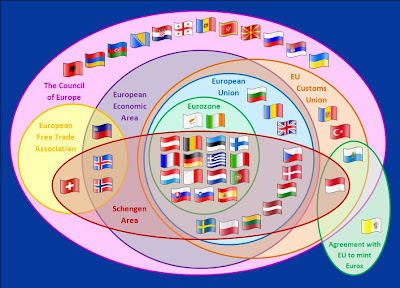 I love flags, and this diagram helps clarify some things about Europe. For an explanation, go here.

It's the 100th International Women's Day, something started by the labor movements of the early twentieth century. For some time, it was mostly celebrated in the Communist Bloc, but with dissolution of that body, it's spread more generally.

How it's declined in Russia.

Where are all the daring women's heroines?

The drumbeat for US intervention in Libya continues. Simon Tisdall on the pressures on President Obama, and a nice overview of the issues from Stephen Walt. I suspect that if Obama were sending bombers to start setting up a no-fly zone, the same people now criticizing him for inaction would be hollering about illegal intervention.
Posted by Cheryl Rofer at 3:17 PM