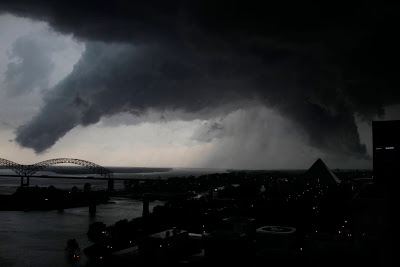 A line of severe storms crosses the Mississippi River in Memphis,
Tenn., passing by the Memphis Pyramid on Wednesday, May 25, 2011.
The dark formation was reported a few minutes earlier as a tornado
in West Memphis, Ark. (AP Photo/Lance Murphey)
Christy Goldfuss at The Wonk Room:

If you tuned in to the House Natural Resources Committee this morning expecting to learn about roadblocks to wind and solar development, you may have been surprised to hear yet again about how to grow the profits of Big Oil companies.
Chairman Doc Hastings’ (R-WA) Natural Resources Committee bumped today’s hearing entitled “Identifying Roadblocks to Wind and Solar Energy on Public Lands and Waters – The Wind and Solar Industry Perspective.” They replaced it with part three of their oil above all look at gas prices, including witnesses associated with the Koch brothers and Jack Abramoff...
...Another witness on the panel, Deneen Borelli, testified on behalf of the National Center for Public Policy Research, which once had Jack Abramoff on its Board of Directors. This connection is particularly of interest given that in her testimony, when discussing the need for a pro-growth energy strategy, Ms. Borelli states:

There is something terribly wrong when the corporate and social elite can use the power of government to advance their narrow interests while harming the standard of living of hardworking Americans, denying us our right to “life, liberty and the pursuit of happiness.”

Big Oil may be the largest example of “corporate and social elite” in the world, and they continue to rely on their friends in the Grand Oil Party to protect their taxpayer subsidies and push for policies that pad their shareholder’s pockets. The votes don’t lie. The GOP controlled house has taken 13 votes that directly benefit Big Oil. Today’s postponed wind and solar hearing is just one more example of the GOP’s plan to protect oil above all, rather than get serious about reducing gas prices with a comprehensive energy plan.

Bill McKibben yesterday at the WaPo:

It’s very important to stay calm. If you got upset about any of this, you might forget how important it is not to disrupt the record profits of our fossil fuel companies. If worst ever did come to worst, it’s reassuring to remember what the U.S. Chamber of Commerce told the Environmental Protection Agency in a recent filing: that there’s no need to worry because “populations can acclimatize to warmer climates via a range of behavioral, physiological, and technological adaptations.” I’m pretty sure that’s what residents are telling themselves in Joplin today.

It is difficult, of course, to link or “attribute” individual extreme weather events in a single year to global warming. Climate factors—including human influences—shape weather patterns. According to Munich Re, one of the world’s largest reinsurers, “the only plausible explanation for the rise in weather-related catastrophes is climate change.” And as Kevin Trenberth, Sc.D., head of the Climate Analysis Section at the National Center for Atmospheric Research, explained at the American Meteorological Society’s January 2011 meeting, “Given that global warming is unequivocal, the null hypothesis should be that all weather events are affected by global warming rather than the inane statements along the lines of ‘of course we cannot attribute any particular weather event to global warming.’”

In other words, says Trenberth [his NY Times piece here], “it’s not the right question to ask if this storm or that storm is due to global warming, or is it natural variability. Nowadays, there’s always an element of both.”

But of course that's what the scientific elite with their fancy colleges and big federal government salaries would say. They're after more government funding so that they can become rich off of taxpayers money.... Or that is, at least, what George Will and other climate change denialists (or obscurantists or liars - lots more here) maintain.
Conservatives/Republicans are leading the way there, aided by well-honed techniques. Martin McKee, an epidemiologist at the London School of Hygiene and Tropical Medicine summarizes them (more here; full paper here):

I'm not suggesting there is a manual somewhere, but one can see these elements, to varying degrees, in many settings," he says (The European Journal of Public Health, vol 19, p 2). 1. Allege that there's a conspiracy. Claim that scientific consensus has arisen through collusion rather than the accumulation of evidence. 2. Use fake experts to support your story. "Denial always starts with a cadre of pseudo-experts with some credentials that create a facade of credibility," says Seth Kalichman of the University of Connecticut. 3. Cherry-pick the evidence: trumpet whatever appears to support your case and ignore or rubbish the rest. Carry on trotting out supportive evidence even after it has been discredited. 4. Create impossible standards for your opponents. Claim that the existing evidence is not good enough and demand more. If your opponent comes up with evidence you have demanded, move the goalposts. 5. Use logical fallacies. Hitler opposed smoking, so anti-smoking measures are Nazi. Deliberately misrepresent the scientific consensus and then knock down your straw man. 6. Manufacture doubt. Falsely portray scientists as so divided that basing policy on their advice would be premature. Insist "both sides" must be heard and cry censorship when "dissenting" arguments or experts are rejected.