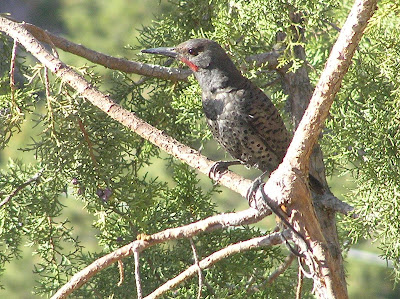 I tweeted a fairly ambiguous photo the other day of a melanistic Northern Flicker. I have wondered how much the flickers here move around; sometimes there are groups of them, and other times not so much. Most of them look pretty much alike, though, so it's hard to tell.

Not this guy. And it is a guy, with the red whisker mark. He's much darker than the standard Northern Flicker, which is what melanistic means. He was back last night for the picture at the top of the post, and this morning he was shrieking at me as I filled the birdbath. So I guess he's here for a while.

We have had a really lousy week for spring weather; spring is, hands down, the worst season in New Mexico. Wind and unpredictable cold spells. So we had some snow. Here's a black-chinned hummingbird making the best of it. Notice how he's fluffed out. I can't for the life of me figure how something this small doesn't freeze solid, but I guess his heat production exceeds the heat loss. He was sucking down the sugar solution a lot of the time. 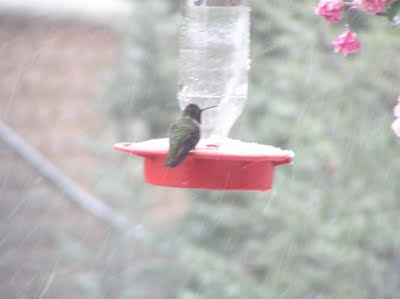 Update: the dogs and cats of war.
Posted by Cheryl Rofer at 12:38 PM