Tuesday I went to Vastseliina. That name has been calling to me for some time now, lovely in my mind.

South Estonia has its own dialect, in which, among other things, the letter õ substitutes for most northern Estonian es. There are other changes, too. Vastseliina becomes Vahtsõliina. Estonians have a full armamentarium of nine vowels, each in short and long (signified by doubling) forms. Õ is the most unfamiliar to English speakers, but we use it. It's even in my name - the y in the last syllable is similar, maybe even the same.

That language is being acknowledged on the road signs, which have both versions of place names.

I headed southeast. I decided to keep a distance from the border with Russia; TSA has convinced me to stay away from bureaucrats in jobs like that. So I turned back when I saw a sign for piirivalve (border patrol). I had driven into Vastseliina on my way out; the major streets were all being resurfaced. I would have liked to have taken a photo of the very attractively painted and massive town hall, but everything was much too much of a mess to try to park. There had been a rather attractive church just visible that I decided to stop at on the way back. So I turned at the Vana (Old) Vastseliina sign.

Good choice. There were the ruins of an episcopal castle from the fourteenth century there. Vana indeed. 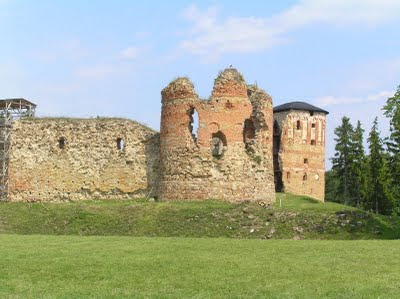 The Germans launched a northern version of the Crusades in the twelfth century, to civilize the pagans living along the shores of the Baltic Sea. So they had to plant castles for the defense of the faith and those faithful they managed to convince to their side. We Americans really don't learn much of this in our history, and there aren't a lot of books on the subject. Eric Christensen's The Northern Crusades is pretty much it. Here are a few more references.

This was a seriously defended castle, on a steep-sided promontory with a ditch dug on the other side. Piirivalve. 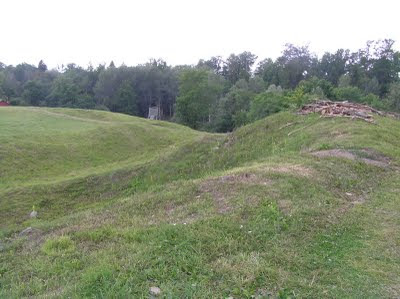 The castle was active in the fourteenth century. Further north, the Narva River and Peipsijärv (Lake Peipus) formed a natural boundary with Russia, but the land is pretty much the same down here from Võru to Pihkva (Pskov) to, probably, Novgorod. Which was more or less the capital of Russia at that time. The bishops liked to push forward, irritating the Russians no little bit. Hence the need for a strong, defensible castle. Alexander Nevsky had stopped the Germans in 1242, a little further north, on Peipsijärv, but they didn't go away until Hitler called them back in 1939.

I munched the seeni- and porgandipirukad (mushroom and carrot pies) that I had picked up at a supermarket and walked around. There were new inhabitants. 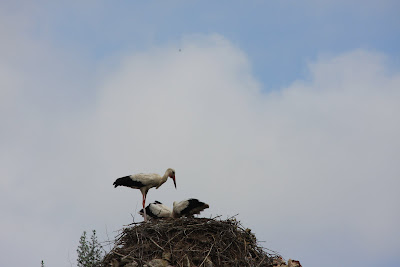 White storks - two chicks almost ready to fledge. The parents were still flying to get food for them.

And plants were taking over the ruins. 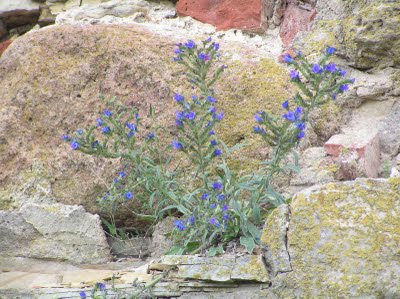 Sic transit gloria mundi.
Posted by Cheryl Rofer at 9:00 AM