A Walk Through Tartu

Tartu is much quieter than Tallinn was. It has the advantage, although I suspect not all find it such, that it is not on the Baltic Sea and therefore not susceptible to tour ships. And it's summer, so the university is out of session, although some students remain.

Estonia changes every time I visit. Every time it becomes a bit more like the rest of the world, Europe in particular. And I become more accustomed to its peculiarities with each trip, narrowing the level of difference.

Bringing my laptop with me also makes a difference, a small environment that changes not at all (well, the Google start page is in Estonian) and keeps part of my mind at home.

The central market here in Tartu is still operating, although it becomes less crowded as business moves to the supermarkets. 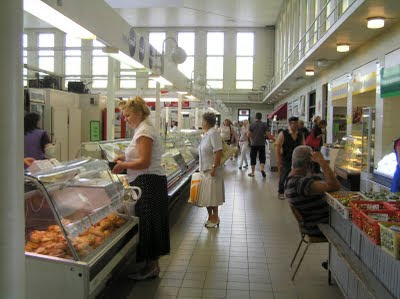 I had a bit of a scare last night when I thought that the vegetable market had been superseded by a glassy shopping center. I have been looking forward to buying strawberries. They are getting to the end of their season, and the wild blueberries were calling to me when I finally walked along the river and realized that the vegetable market was still there. Lots of stuff I'd like to buy if I had cooking facilities, like beautiful potatoes, but they're good in the restaurants too. 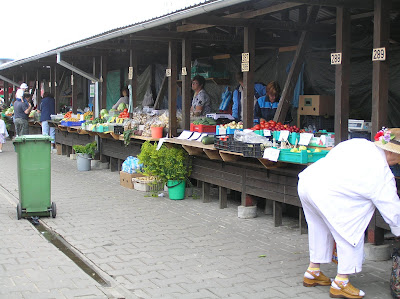 When Santa Fe Farmers' Market built a building, I expected it to have booths something like what you see in the photo. But they just built a big building, no booths. The farmers have to set up tables and, outside, umbrellas. Altogether less advanced than Tartu.

I picked up a pastry full of kohupiim, a milk product that we don't have in the US. It's cottage cheese curd, but in a continuous form. Very nice for pastries and cheesecake-like delicacies.

One of the hazards of the outdoor market was jackdaws (Estonian: hakk) snatching goodies. One flew right in front of me to seize a peapod, nearly hitting me and other customers. 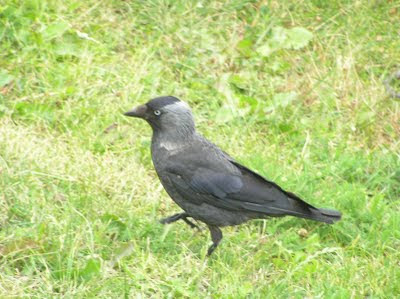 I also bought some chocolate and a candy that is somewhat like the Mr. Peanut bars (do they still have those?), but with sunflower seeds instead of peanuts. I like sunflower seeds. This is more a Russian treat than Estonian, but at least, unlike the tourists who must be buying all those matryoshka dolls in Tallinn, I know that.

Probably a single random souvenir store in Tallinn now contains more amber than all of Tallinn did when I first visited, in 1998. But it's not as interesting: spherical beads, all pretty much the same color. And lots more just like that. Little dangly slivers of amber earrings. And of course refrigerator magnets and bags that say Tallinn over and over again. Not too many t-shirts and baseball caps, though.

Some genuinely nice linen goods, and many sweaters with Estonian pictoral and geometric designs. None with the handwork that I acquired. A few art shops doing interesting new things with Estonian designs. And some yarn I will take back with me, unless I find better during my travels.

Not surprising, of course. The many cruise ship passengers who know little or nothing about Tallinn and Estonia are happy with refrigerator magnets or a not-too-distinctive-by-my-terms amber necklace. And a photo of them smiling with some landmark in the background.

One of the things that pleases me is to be taken for an Estonian. James Fallows has written about the phenomenon of being able to recognize people of various nationalities. I used to be more convinced I could do this consistently, but I would now claim it only occasionally. I think that there are some people who feel they must broadcast their nationality; probably part of this is defensiveness, a response to an environment in which they are uncomfortable because it is unfamiliar. In Tallinn, I recognized Russians, Germans, and Americans of this species.

Conversely, one of my points of pride is to be taken as Estonian here. One woman at the market conversed at some length with me in Estonian. I understood enough to murmur and move my head persuasively. The illusion disappears when I speak. I have a strong enough American accent when I use Estonian that I am no longer persuasive. Or I give up and ask if they can speak English if I need a more complex communication.

Fallows and his readers have opined at some length on what makes a person seem to be one nationality or another at some length, and I haven't found any of it particularly persuasive. I have a generic northern European look, which does not transfer into Russia. I am quiet, and many Estonians are quiet. I have been told by American friends that I walk like a European. And I say "tere" with the unaspirated t and rolled r

There was also a flea market in the park. 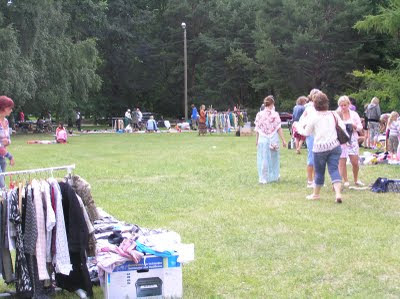 It was the usual flea market assortment of things, a lot of clothing, some handicrafts, and old Soviet pins.

But this photo could go back to the nineteenth century or earlier. 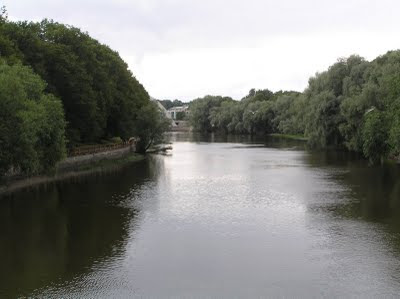 Finally, I do enjoy the sense of humor that Estonians apply to their concrete vehicle barriers. Department of Homeland Security, are you watching? 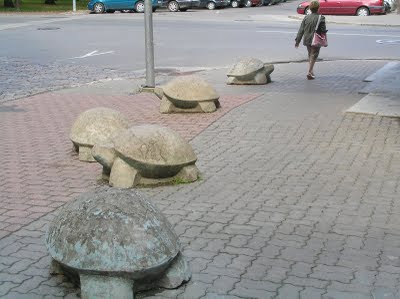