Then the governor prayed, publicly and often. Alas, a rainless spring was followed by a rainless summer. July was the hottest month in recorded Texas history. Day after pitiless day, from Amarillo to Laredo, from Toadsuck to Twitty, folks were greeted by a hot, white bowl overhead, triple-digit temperatures, and a slow death on the land.

In the four months since Perry’s request for divine intervention, his state has taken a dramatic turn for the worse. Nearly all of Texas is now in “extreme or exceptional” drought, as classified by federal meteorologists, the worst in Texas history.

Lakes have disappeared. Creeks are phantoms, the caked bottoms littered with rotting, dead fish. Farmers cannot coax a kernel of grain from ground that looks like the skin of an aging elephant...

“I think it’s time for us to just hand it over to God, and say, ‘God: You’re going to have to fix this,’” he said in a speech in May, explaining how some of the nation’s most serious problems could be solved.

I hope he's praying for a Republican victory. 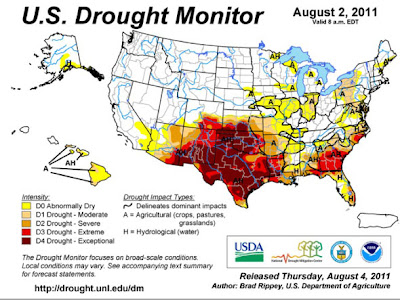