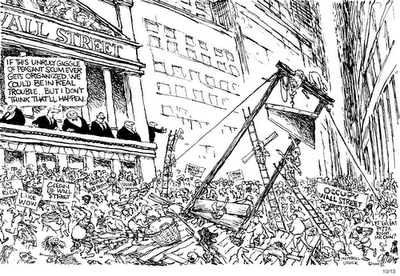 From the Atlantic: #OWS: What the Media Can't See About America's First Web-Era Movement

Matt Taibbi at Rolling Stone: My Advice to the Occupy Wall Street Protesters

After a TNR editorial panning the movement, John Judis and Jonathan Cohn come out in support.

Ezra Klein and co-workers have been positive all along, and Suzy Khimm now reports that the movement is spreading to London.

I've stolen the Oliphant cartoon from Balloon Juice, who probably stole it from Oliphant himself. Never mind, there's no doubt who penned it. BJ is also covering the movement.

A big pile of charts on why the protesters are angry, from Henry Blodget.

And I know that the issues are mostly economic, but I can't help but think that the aura of not-so-competent law enforcement that nevertheless (or because of?) insists on maximum power contributes to the uneasiness. Think TSA, and, yeah, this starts to overlap with that alleged Iranian plot, or at least the way the Department of Justice rolled it out, or strip searches for traffic tickets. It was humiliation that caused Tunisian Mohammed Bouazizi to set himself on fire.

Update (already): OWS is now twice as popular as the Tea Party. There's been a spate of articles this week looking at the similarities between the two. It occurred to me this morning that the big difference is the hate promulgated by the Tea Party and the much more positive affect of OWS. Most people aren't haters.
Posted by Cheryl Rofer at 2:49 PM

Thanks for these links, very interesting!