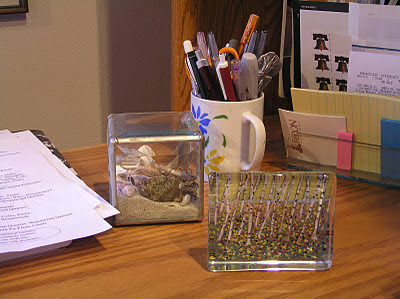 ZenPundit (aka Mark Safranski) has given us a bit of holiday nostalgia in a blog challenge.

I’m not sure that’s the proper name for it, or if the custom ever had a name. It’s a throwback to the early days of blogging, say 2004, when I started. We bloggers were eager for links and clicks, and one way to get links was a sort of chain letter: here’s what’s on my desk, and I challenge blogger1, blogger2, and blogger3 to do the same. Those were linked, of course, and when those bloggers wrote their posts, they would link back to you.

The blogworld has moved on, at least the parts I frequent. Some of the bloggers from back then like Praktike (aka Blake Hounshell) and Marc Lynch have moved on to bigger things, and some have stopped blogging altogether. Some of us, like Mark and me, have stuck with it, augmented by Facebook and Twitter. The MSM have encroached with media they frequently call blogs, but, since those documents are generated by paid staff and presumably edited for conformity with the parent publication’s policies, they’re not quite what I would call blogging.

So okay, here’s what’s on my desk. I never did pass these challenges on to others, just as I don’t send chain letters on, but that never has stopped Mark from listing me.

It’s hard to delineate exactly what constitutes my “desk.” I have a wrap-around set of shelves and worktable that, for the most part, contains the usual things: papers, office supplies, the small mechanisms necessary to working with paper and computer (stapler, postage scale, hand calculator), and a telephone. More paper. At least two cameras have temporary residence on the worktable, sometimes migrating to the windows through which I can see birds and other wildlife in the yard. Materials for the next Nuclear Diner meeting. For now, Christmas cards and associated address labels and stamps. Material to be organized into scrapbooks. Android being recharged. A cup of pens, pencils, envelope knife, and scissors, the cup from a flower arrangement someone sent me a long time ago.

Copies of Sky Calendar from the Abrams Planetarium at Michigan State University. This is very worth subscribing to for information about interesting stuff in the sky, like eclipses and meteor showers. An Iittala glass paperweight with a picture of birch trees in the fall that I bought in the Helsinki Airport. And a cube with glass sides containing sand, driftwood, shells, and rocks from the Oregon beach. I can turn it different ways to get different scenes. The paperweight and the Oregon beach scene are in the photo above, along with the cup of pens.
Posted by Cheryl Rofer at 5:23 PM

It was motivated by nostalgia, as well as the realization that my desk was getting cluttered. I recall one of the first i particpated in was "What book is in your antilibrary" and the tagging meme took off until it burned itself out circa 2006-2007.

The nice aspect was these casual/cultural posts trumped politics or professional agendas and created a friendly common ground. The blogosphere could use more of that.

But they're filling up the intertubes, and that serves the purpose of their MSM masters.