Not What We Thought! Not That We Had Any Idea What We Were Talking About. 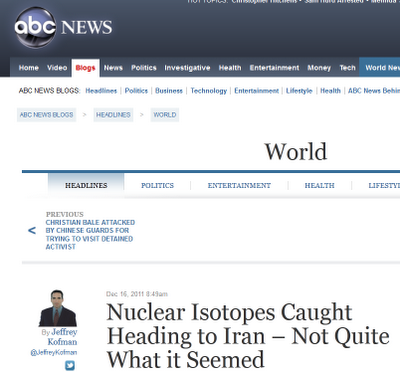 And another warning: the breathless foolishness is the autoplay video so beloved of ABC alone.

Not Quite What It Seemed. Sigh.

The newsies at ABC got a report that radioactive material was stopped by Russian customs from being transported in someone's baggage to Iran. So a bunch of presumptions, aided and abetted by a shaky understanding of what radionuclides are, kicked in to produce a knee-jerk story about how Iran must be making a nuclear bomb. That's in the autoplay video that I expect to disappear from the ABC site.

It beats me why someone would pack a bunch of sodium-22 in their luggage. It's mostly used for medical diagnostics, and there are better ways to transport it, through channels. It's not at all useful for bomb-making.

OTOH, it's good to know that the radiation detectors at the airport caught it. Sodium-22 is a beta emitter, and beta radiation can be hard to detect. One of my colleagues used to say he could distribute beta emitters knee-deep and nobody would find them. But that was twenty years ago, and detector technology has improved.

AP did a better job at the news.

Cross-posted at Nuclear Diner.
Posted by Cheryl Rofer at 12:58 PM