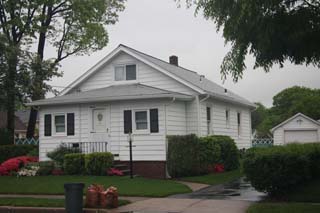 Today’s Thanksgiving is an American holiday. But other countries have their Thanksgivings and harvest festivals. I think there’s something we all can give thanks for: that we humans seem to be improving ourselves.

Yes, I’ve been following the news of Israel and Gaza and the probably cynical calculations behind the deaths. We’re improving, and we’ve still got some way to go.

But I think that Steven Pinker is right in The Better Angels of Our Nature: deaths by violence are many fewer than they were, or than we expected them to be, even a century ago. And I’m thankful for that.

I’ve seen big changes in my lifetime. Just yesterday I received a copy of the March 29, 1954, Life Magazine. It has a story about the Japanese fishermen caught up in the fallout of a US H-bomb test. The headline reads “First Casualties of the H-Bomb.” First. We expected that there would be more casualties.

The photo up top is a house I lived in, a long time ago. There were fewer houses around it, more trees and a creek. It’s good to recall where we came from.

If you haven’t read Pinker’s book, here’s a nice short (half-hour) summary, with some of the questions I had after reading it.

In a more American vein, Stephen Walt offers up ten reasons to give thanks.

Happy Thanksgiving to all our readers – wherever you may be!

Greetings also posted at Nuclear Diner and The Agonist.
Posted by Cheryl Rofer at 9:12 AM