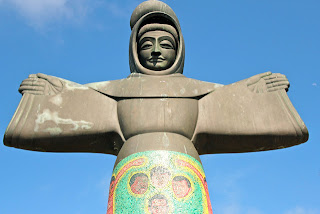 Cities across the country have bought guns back for many years now. The buy-backs usually last for a limited time and may or may not make a difference in the number of guns on the street. They’re not the whole answer to keeping schools and children safe, but one of a number of things that might be done. I’ve listed some of the others here.

Buyback campaigns also draw attention to the dangers of guns and encourage people to rethink whether having them around is really a good idea. San Francisco and Oakland are doing one now.

Some of the campaigns have left lasting monuments. In 1968, after the assassinations of John and Robert Kennedy and Martin Luther King, sculptor Benny Bufano made a St. Francis of the Guns statue out of the gun metal. It still stands in front of the entrance to the science building of the City College of San Francisco.

Cross-posted at The Agonist.
Posted by Cheryl Rofer at 11:49 AM