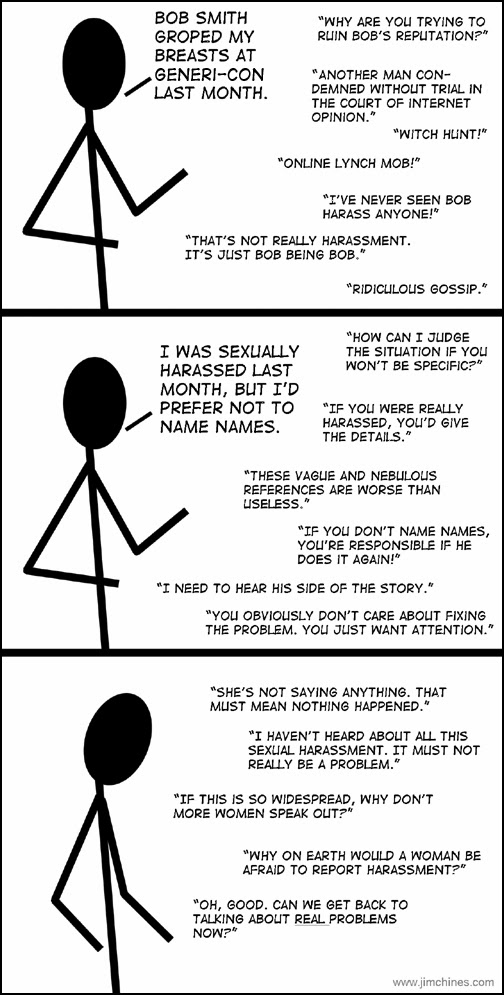 Bora Zivkovic is back.

He’s back at his own blog, not at Scientific American. And that blog is now private, as it was not when I started writing this post. Zivkovic was the editor of the blog section at Scientific American. He resigned from that position in October, after it was revealed that he had sexually harassed at least two women who thought their coffee dates with him were about writing. An account of the whole sad story is here, with some reasonable observations about what Zivkovic and others might have learned about the uses of power.

Not only is Zivkovic back, but his friend, Anton Zuiker, who worked with him on the board of ScienceOnline, from which Zivkovic also resigned in October, has written a long post about their friendship and how hard it is to know another person. He would like to see Zivkovic back on line, he would like to see reconciliation. The day after that post appeared, the ScienceOnline board stated:

We believe it is important that all board members and business professionals are able to have a personal voice separate from their official roles. However, given the close personal and professional history between Bora Zivkovic and Anton Zuiker – and their connection with ScienceOnline – we’ve asked Anton to refrain from any public communication about Bora and that all official communications from ScienceOnline come from the entire board or its Executive Director, Karyn Traphagen.

Zuiker’s encomium remains available. One of the comments is very worth reading.

There are two issues here. One is the personal saga of Zivkovic’s actions, what may have motivated them, and how he recovers from them. The other is how Zivkovic’s story parallels other stories in the history of the differences in how women’s and men’s careers proceed. The two frequently became intertwined in the furore over his actions. I'm mostly interested in the second.

This is a highly emotional subject for women. All of us have been subjected to men’s sexual fantasies in ways we can’t avoid. Perhaps inappropriate conversation over coffee. Perhaps a scientific conversation in which the man’s eyes never travel above my neck. Perhaps the suggestion that there is an extracurricular way to get a higher grade or better job. Others have made long lists. Men seldom have to endure such things, but they are a regular occurrence for women, who can see men interacting with each other as adults focused on a scientific or business task. And if we bring it up, that’s likely to hurt us too. Frustration leads to blow-ups, which is what we saw on social media in October.

And there’s pop culture. And rape culture. And abuse of women on the internet. And, of course, the forever old boys’ clubs. I’ve missed the worst of this, but no woman avoids all of it. So yes, I am annoyed. As Zuiker almost observes, it’s fully possible for two men to be friends and never consider the damage one or the other is doing to women.

It’s that invisibility that is the problem, as the cartoon I’ve borrowed from Jim C. Hines illustrates. I pulled this quote before Zivkovic’s blog went private.

Also in October I moved my blog from its spot at Scientific American back to its home here.

Purely voluntary, on the face of it. High-level people at high-quality magazines are allowed to resign, they’re not fired. Nothing, nothing at all about some upsetting circumstances in October. One more denial that damage to women counts for anything.

Let your friend warmly testify to your generosity and loyalty, while you quietly move forward. If you don’t mention it, people will forget. Or at least stop talking about it.

That, of course, is what women have had imposed on them along with the harassment. Oh no, my dear, Mr. Harasser is a decent family man and valuable to the organization. You must be imagining things. Or: He’s apologized, and I’m sure will never do that again.

But people do keep doing things they shouldn’t again and again. It’s the time of the year to resolve to give up bad habits. A few will succeed, but most will be back to smoking or drinking or eating too much or not exercising enough by March.

I want to believe that people should be given a second chance. However, a great many women haven’t even had a decent first chance because of harassment. Their second chances will be much more difficult or nonexistent. Good will toward Zivkovic, in other words, can enable the behavior patterns that have damaged women for so long.

So what can he do? I don’t see any statement he can make, any organization that he can join, that would be credible to me as showing a change of heart. And here’s something to think about: There’s a great deal of talent out there, much of it in women. Zivkovic had his successs, and he threw it away. It’s time to let other people show what they can do, and how they can do it better than he did. A quiet life at home and private blog are not the worst things in the world.