The President Of All The Russias Speaks 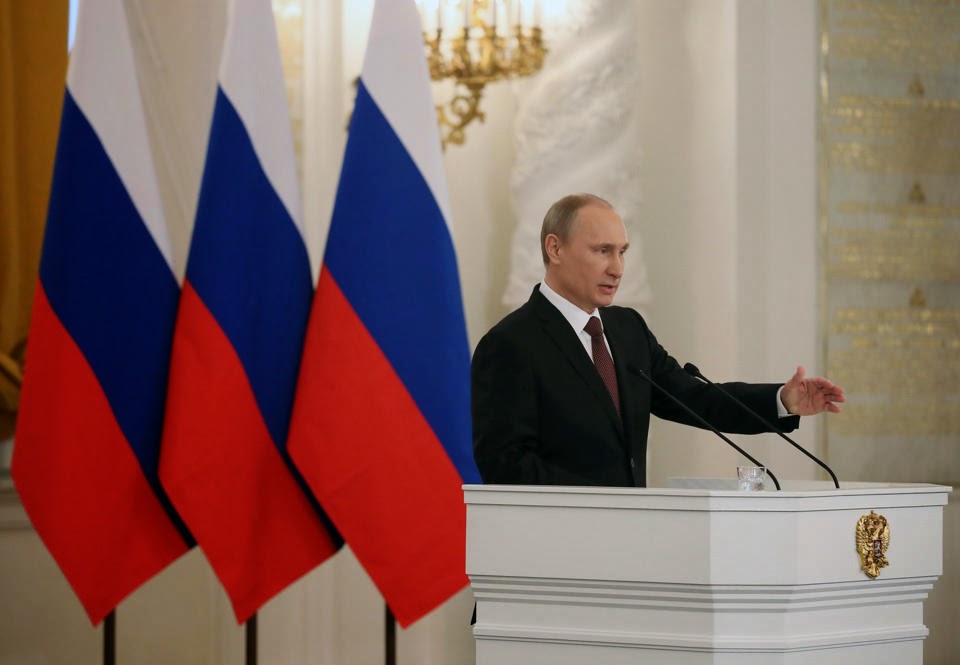 Before he signed a measure incorporating the Crimea into the Russian Federation, Vladimir Putin gave a speech (official English translation). The speech lays out his justification for annexing Crimea and lists a number of grievances and a few promises. It is shot through with misstatements of fact. The Washington Post’s Fact Checker, Glenn Kessler, gives the factual content of the speech four pinocchios, indicating a high degree of inaccuracy. I can find a number of other inaccuracies, but that is not my focus. Links at the beginning of quotes should take you to that part of the speech.

Putin’s justification for annexing Crimea is based on his reading of history. Historical arguments, of course, can be bent in any direction. Kessler debunks the claim that the Crimean referendum was “in full compliance with democratic procedures and international norms.” When Putin says that the numbers speak for themselves, that  “[m]ore than 82 percent of the electorate took part in the vote. Over 96 percent of them spoke out in favour of reuniting with Russia,” I agree. Those numbers are typical of manipulated elections.

He addressed the situation of the Crimean Tatars, but then claims that in Russia, “not a single ethnic group has been lost over the centuries.” That was not for lack of the Kremlin’s trying. The Tatars were not the only ethnic group exiled and killed. The Circassians tried to get their story out to the world during the Sochi Olympics. And there are others. Perhaps Russia has recovered from Stalin’s penchant for genocide and will treat the remaining Crimean Tatars more decently. However, Putin tells us, the Russians suffered more.

Putin’s historical argument, combined with the way he regards “Russians,” has led to wars throughout history.  The way he speaks about “Russians” is instructive. He starts by separating “Russian citizens” and “Russian speakers,”

However, we expected Ukraine to remain our good neighbour, we hoped that Russian citizens and Russian speakers in Ukraine, especially its southeast and Crimea, would live in a friendly, democratic and civilised state...

but then goes on to conflate the two as “Russians.” The term “Russian speakers” appears only one other time in the speech. Before that, however, he mentioned “the Russian nation” broadly:

Millions of people went to bed in one country and awoke in different ones, overnight becoming ethnic minorities in former Union republics, while the Russian nation became one of the biggest, if not the biggest ethnic group in the world to be divided by borders.

Millions of Russians and Russian-speaking people live in Ukraine and will continue to do so. Russia will always defend their interests using political, diplomatic and legal means.

Other mentions of “Russians:”

Time and time again attempts were made to deprive Russians of their historical memory, even of their language and to subject them to forced assimilation. Moreover, Russians, just as other citizens of Ukraine are suffering from the constant political and state crisis that has been rocking the country for over 20 years.

After all, they [“our western partners”] were fully aware that there are millions of Russians living in Ukraine and in Crimea. They must have really lacked political instinct and common sense not to foresee all the consequences of their actions. Russia found itself in a position it could not retreat from. If you compress the spring all the way to its limit, it will snap back hard. You must always remember this.

Our nation, however, unequivocally supported the sincere, unstoppable desire of the Germans for national unity. I am confident that you have not forgotten this, and I expect that the citizens of Germany will also support the aspiration of the Russians, of historical Russia, to restore unity.

Here Putin is referring to the unification of Germany after the fall of the Soviet Union, but the context of “historical Russia” and “Russians” echoes another part of Germany’s history, expansionism in the name of protecting its “nationals.”

The most recent public opinion surveys conducted here in Russia show that 95 percent of people think that Russia should protect the interests of Russians and members of other ethnic groups living in Crimea – 95 percent of our citizens.

This conflating of “the Russian nation,” Russian citizens, and Russian speakers potentially is a justification for intervention in many nations. The excuse of protecting one’s own “nationals” has been used to justify many wars. Moscow is now claiming interest in the welfare of Russian-speakers in Estonia. For a long period during the 1990s, public opinion polls in Russia showed that Russians felt the country that posed the greatest threat to Russian security was Estonia. All 1.3 million residents.

Grievances
The speech is full of bitterness against wrongdoers who Putin feels have damaged Russia. Here is a sample. I had hoped to find a coherent list of specifics, but much of the bitterness is expressed in generalities.

After the revolution, the Bolsheviks, for a number of reasons – may God judge them – added large sections of the historical South of Russia to the Republic of Ukraine.

Then, in 1954, a decision was made to transfer Crimean Region to Ukraine, along with Sevastopol, despite the fact that it was a federal city. [He goes on to say that this was unconstitutional. Kessler finds that incorrect.]

Now, many years later, I heard residents of Crimea say that back in 1991 they were handed over like a sack of potatoes. [see Kessler.]

Time and time again attempts were made to deprive Russians [in Ukraine] of their historical memory, even of their language and to subject them to forced assimilation.

Nationalists, neo-Nazis, Russophobes and anti-Semites executed this coup. They continue to set the tone in Ukraine to this day. [see Kessler.]

Like a mirror, the situation in Ukraine reflects what is going on and what has been happening in the world over the past several decades. After the dissolution of bipolarity on the planet, we no longer have stability. Key international institutions are not getting any stronger; on the contrary, in many cases, they are sadly degrading. Our western partners, led by the United States of America, prefer not to be guided by international law in their practical policies, but by the rule of the gun.

He also blames the breakup of Yugoslavia and other events, including the Arab Spring (“turned into the Arab Winter”) on the United States.

We understand what is happening; we understand that these actions were aimed against Ukraine and Russia and against Eurasian integration.

Let me note too that we have already heard declarations from Kiev about Ukraine soon joining NATO.

Promises
Putin makes a number of promises in the speech, including the generalities one might expect in a speech like this. I have collected the more specific ones here. One measure of his sincerity is to keep track of how many are fulfilled.

I believe we should make all the necessary political and legislative decisions to finalise the rehabilitation of Crimean Tatars, restore them in their rights and clear their good name. [This report came through as I was writing. Only took a single day to destroy this promise.]

…it would be right – I know the local population supports this – for Crimea to have three equal national languages: Russian, Ukrainian and Tatar.

…our relations with Ukraine, with the fraternal Ukrainian people have always been and and will remain of foremost importance for us.

Not in the speech, but another promise: to connect Crimea to Russia across the Kerch Strait by a bridge or tunnel.

Putin is bitter that the Soviet Union ended. It was not the west that brought it down, but Soviet Communism’s inherent contradictions. The conquest of territory by force is a major break with Russian behavior over the past quarter-century, although it has historical resonances with earlier periods of history.

The title of this post is an allusion to the title of the Tsar as given in Russia’s 1906 constitution:
Emperor and Autocrat of all the Russias, of Moscow, Kiev, Vladimir, Novgorod, Tsar of Kazan, Tsar of Astrakhan, Tsar of Poland, Tsar of Siberia, Tsar of Chersonesos Taurica, Tsar of Georgia, Lord of Pskov, and Grand Duke of Smolensk, Lithuania, Volhynia, Podolia, and Finland, Prince of Estland, Livland, Courland and Semigalia, Samogitia, Belostok, Karelia, Tver, Yugra, Perm, Vyatka, Bulgaria and other territories; Lord and Grand Duke of Nizhny Novgorod, Sovereign of Chernigov, Ryazan, Polotsk, Rostov, Yaroslavl, Beloozero, Udoria, Obdoria, Kondia, Vitebsk, Mstislavl, and all northern territories; Sovereign of Iveria, Kartalinia, and the Kabardinian lands and Armenian territories – hereditary Lord and Ruler of the Circassians and Mountain Princes and others; Lord of Turkestan, Heir of Norway, Duke of Schleswig-Holstein, Stormarn, Dithmarschen, Oldenburg…and there’s more…

So glad you caught the part about the Taters being relocated.
As best I can figure the man is psychotic. All the while the current events in Crimea were going on Exxon was penning a deal with Rosneft Russia's largest energy company. So keep an eye out should sanctions be placed on oil and gas production.

Very good blog you have here.