This is not your old Soviet realism or ubiquitous "gritty" American street realism. Neither is it official American-style photography drenched in the most prosaic hues of red and blue. What makes this new photography so different, so appealing? 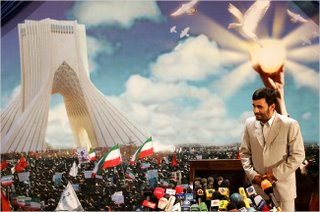 You look at the photo and see a crowd of adoring citizens. You do a double-take only to realize that the only "live" figure is Ahmadinejad. You light a cigarette after fumbling in your pocket for matches. Recall the photo from a couple of weeks ago when Ahmadinejad announced Iran's nuclear breakthrough. Doves fluttered aloft behind the figure of Ahmadinejad. The second glance yielded the doves' artificial permanence on a painted backdrop (also appearing in this photo). The adoring, frenetic crowd in the photo is rendered static not by the paint but by the calm figure of Ahmadinejad.

Observe the lighting. The background is lit by a painted Ball of Divinity. Ahmadinejad, however, is front-lit. The American photographer Philip-Lorca Dicorcia uses a similar effect, although artificially, by illuminating subjects with a displaced and incongruous burst of light from a flashbulb. This creates the effect of a solitary subject abstracted from and internalized in relation to the urban surroundings. The life of the subject becomes intimate, but the intimacy comes at the price of a subject immersed in a living world.

Note the dais in the photo above. It is turned towards the artificial subjects, as if Ahmadinejad has just addressed his people and now turns to the media with the legitimacy of his regime fully intact. This requires simply the rotation of his casually suited body from the painted masses to the photographed microphones. It mocks the American administration. Mocks!

Now, I'm also a great fan of North Korean government photography. But it holds no candle to the new Iranian photography. This is a brilliant new existentialist statement, destined to take its place at the forefront of contemporary pre-war culture.
Posted by helmut at 12:10 AM

But why is he clutching his goolies?

There is something about this picture that reminds me of a Christmas e-card I was sent once. It came from a company in India we did business with once (a small transation we handled for a friend who couldn't speak English). The Indian company was a delight when it came to efficiency and politeness, and then, several months later, I received this surprise Christmas email.

The picture was really, really hard to interpret (and perhaps I should send it to you to interpret for me). It shows two figures in turbans standing close together and POSSIBLY holding hands, but you can't actually see that, in a place that looks like a desert, the moon, or a dumping site. In front of them appears a figure bathed in light. This figure could be anyone, and has no legs. (Japanese ghosts have no feet. What IS it about these supernatural figures and feet?) Behind the two turbaned figures are two animals which look like pigs with skin diseases, badly drawn sheep, or white Yorkshire terriers. In the foreground, scattered over the ground, are some bits and pieces which could be rocks, broken crockery, bits of machinery, or... or... something. And to the right there is what looks like a fallen down Christmas tree. Maybe.I've just been staring at it again and now I think maybe it's a baby in swaddling clothes, ON FIRE, trying to sit up.

It is the most wonderful ecard I have ever received, and I couldn't bring myself to delete it. I don't think I ever spent that much time actually LOOKING at an ecard before. I'm sure it's full of symbolism, but it leaves me utterly, happily baffled.

Badaunt - are you hitting the acid again?

That sounds like a damn cool postcard. Traveling in Nepal and India I found that it was common for men to hold hands.

Feet are bad, though. It's like this in a lot of Asian and Near Eastern culture. Feet are dirty, and so pointing them or touching them is a sign of offense or uncleanliness.