I suppose I should say something about Eurovision 2006 since I've done two lead-up posts of press conference statements (here and here), and now there are all these Finns and Icelanders hanging out here. If traffic in English is any indicator, I'd be placing my money on Iceland's Sylvia Night or Finland's Lordi. They are, however, also the two boffo characters in the competition.

Today is the semifinal of Eurovision 2006. You can sing along here by webcast, and get other information. Did you know that ABBA's "Waterloo" was voted best Eurovision song ever? I didn't either. Now I do, and I'm filing that information away. I used to ice skate to that song when I was a kid; that and "Dancing Queen" (no comment). An ice rink in Bangkok - the only one there at the time - with a Thai dj who loved ABBA. I would hold hands with the lovely Michelle while she skated backwards. Young love... Anyway.... 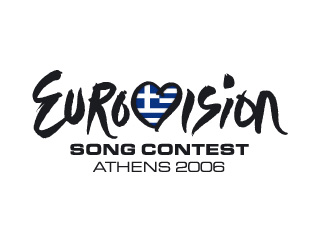 Eliminating the US and the UK from the competition (they're always about like that), Finland is still in the lead, although Sweden has moved up in the past hour and is breathing down Finland's cold backside. Norway has also moved up, while Iceland has dropped a spot. Lithuania is making a late run. Who will win Eurovision Phronesisaical 2006? 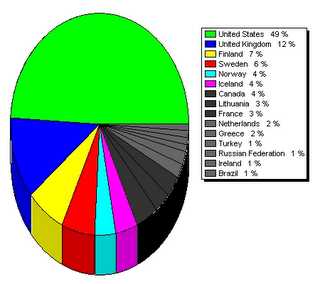 Wow, it's a free-for-all with Finland and Sweden battling it out. Or, shall I say, lording it over the competition? Iceland's Sylviaaaa Nightttt didn't make it to the finals. The finals will be less glorious and splendid as a result. And apparently uglier. 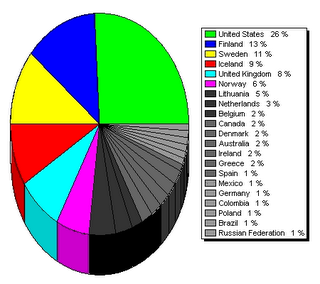 vive la France!
(I think they will surprise you-- the Scandanavians have an early lead just because they wake up early.)

The Lithuanians are now invading cyberspace. Finland has dropped into second place with Swedend still coming along behind. Iceland traffic has dropped dramtically since Sylvia Night didn't make it.

I watched the semifinals with Estonian friends. I thought the Lithuanians blatant play "We are the Winners of Eurovision" was pathetic, but it won a place in the semifinals.

Iceland was using a similar strategy, but not quite so blatant.

I rather liked Ukraine's entry, which I think made it to the semifinals.

My friends explained the vote-trading to me. Apparently the Balkans have it pretty well down, and this was reflected in Macedonia's and someone else's moving up to the finals.

A long and mournful piece on local news last night about Estonia's loss.