The UN Committee Against Torture has concluded that tasering is a form of torture.

"The use of these weapons causes acute pain, constituting a form of torture,'' the UN's Committee against Torture said.

And, after a series of recent deaths and ongoing general abuse of taser guns, we have this laughable remark from the company that makes the device.

The company that makes the weapons has said that similar deaths have been shown by "medical science and forensic analysis'' to be "attributable to other factors and not the low-energy electrical discharge of the Taser".

You see, it's like any conventional gun. The fact that people's internal organs and skin are not impermeable to bullets is the all important "other factor." 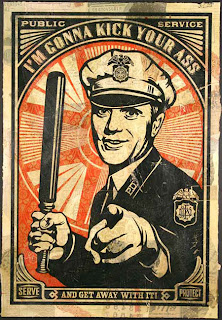 More here from James Wolcott and Arthur Silber.
Posted by helmut at 2:02 PM

On the whole a taser is better than getting shot 26 times in the vestibule of your apartment by nervous policemen.