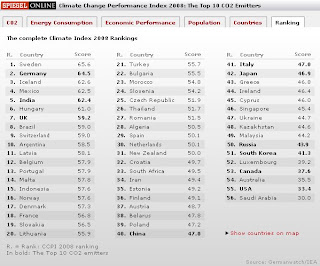 Remember, the problem of climate change is not simply the hydro-meteorological phenomena in themselves. It is that some countries are vastly more vulnerable to the effects of climate change than other countries. And, tragically, some of those other countries that will feel lesser effects (e.g., the US) are most responsible for the problem. It's thus not simply a question of national economic interests. It's a question of harm. Historically, that harm may have been unintentional - nobody truly knew that industrial emissions could affect the climate itself. But, today, US intransigence amounts to intentional harm. This is why the Bush administration has constantly pointed to, and fetishized, various remaining scientific uncertainties. They are the only thing that allow the US the self-image of not being a moral pariah on climate change.
Posted by helmut at 10:52 AM