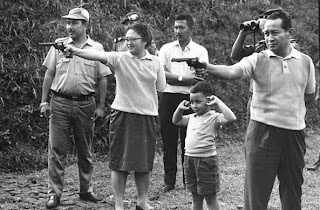 The death of Indonesia's former dictator, Suharto, yesterday is another reminder of the brutality of the twentieth century and how the West picks and chooses its megalomaniacs. Suharto is another case of the West - particularly the U.S. - supporting a dictator in the face of full evidence of crimes against humanity. (see also obituaries here and here).

The Suharto family was and continues to be notoriously corrupt, having siphoned international funds intended for humanitarian relief, to name but one common instance. Worse, obviously, is that Suharto committed one of the worst genocides of the last century. During the 1960s, he led the massacres and tortures of an estimated 600,000 to over 1 million Indonesians, mainly suspected communists and Islamists. Another 200,000 were killed in East Timor from the mid-1970s to 1999, another 100,000 in West Papua, and an estimated 15,000 in Aceh. Throughout it all, the support of the United States, Britain, Australia, and other countries was unbending. John Pilger writes,

Here lies a clue as to why Suharto, unlike Saddam Hussein, died not on the gallows but surrounded by the finest medical team his secret billions could buy. Ralph McGehee, a senior CIA operations officer in the 1960s, describes the terror of Suharto's takeover in 1965-6 as "the model operation" for the US-backed coup that got rid of Salvador Allende in Chile seven years later. "The CIA forged a document purporting to reveal a leftist plot to murder Chilean military leaders," he wrote, "[just like] what happened in Indonesia in 1965." The US embassy in Jakarta supplied Suharto with a "zap list" of Indonesian Communist party members and crossed off the names when they were killed or captured. Roland Challis, BBC south-east Asia correspondent at the time, told me how the British government was secretly involved in this slaughter. "British warships escorted a ship full of Indonesian troops down the Malacca Straits so they could take part in the terrible holocaust," he said. "I and other correspondents were unaware of this at the time ... There was a deal, you see."

The deal was that Indonesia under Suharto would offer up what Richard Nixon had called "the richest hoard of natural resources, the greatest prize in south-east Asia". In November 1967 the greatest prize was handed out at a remarkable three-day conference sponsored by the Time-Life Corporation in Geneva. Led by David Rockefeller, all the corporate giants were represented: the major oil companies and banks, General Motors, Imperial Chemical Industries, British American Tobacco, Siemens, US Steel and many others. Across the table sat Suharto's US-trained economists who agreed to the corporate takeover of their country, sector by sector. The Freeport company got a mountain of copper in West Papua. A US/European consortium got the nickel. The giant Alcoa company got the biggest slice of Indonesia's bauxite. America, Japanese and French companies got the tropical forests of Sumatra. When the plunder was complete, President Lyndon Johnson sent his congratulations on "a magnificent story of opportunity seen and promise awakened". Thirty years later, with the genocide in East Timor also complete, the World Bank described the Suharto dictatorship as a "model pupil". 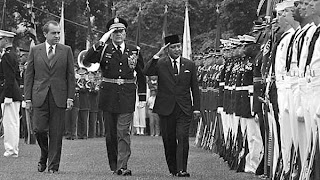 Photo: AP
The ubiquitous Henry Kissinger was yet again at the heart of human rights violations.

Suharto gained his biggest reward for destroying the Indonesian left when he invaded East Timor in December 1975, only a day after the US president, Gerald Ford, and his secretary of state, Henry Kissinger, had dined with him.

As secret documents obtained in 2001 by the independent Washington-based National Security Archive would reveal, Suharto asked for US "understanding if we deem it necessary to take rapid or drastic action". In reply, Ford told Suharto: "We will understand and will not press you on the issue."

With Suharto's death, amidst the grotesque international eulogies from foreign leaders, a few journalists have thought to revisit the stories of those who suffered under the dictator.

In recent interviews around the city of Blitar, a former communist stronghold, survivors of the atrocities recounted a life on the run, living in caves, being beaten and beheadings of other captives.

"I am disappointed. I saw great cruelties and am lucky I am not dead," said Talam, whose simple two-room home overlooks a valley dotted with overgrown mass graves.

Dragging on a clove-cigarette with trembling hands, he described how he was detained by police but escaped. He stumbled across dead bodies in shallow graves and slept in dank caves with hundreds of others, eating what the jungle had to offer for 50 days, until being picked up.

Talam, a former member of a left-wing union for park rangers, said he was tortured and beaten repeatedly during interrogations while detained on remote Buru island, where about 12,000 political prisoners were held, 1,100 miles east of the capital, Jakarta. "Why has no one been put on trial?" he asked.

In fact, the dark era remains largely unknown to many Indonesians. Those believed responsible still wield influence in politics and the courts. Details of the communist purge are banned from school books, and the military has blocked efforts by relatives to unearth mass graves....

Compare Suharto to, say, Pol Pot or Saddam Hussein, both considered to be the epitome of evil by the civilized world. One could be forgiven for mistaking evil as a relative term of economics and geopolitics, rather than morality.
Posted by helmut at 10:24 PM

General Suharto spent his life creating an American version of the evil Dutch East Indies Corporation (VoC) - a Corporate State. In 1961 Suharto organised a pathetic attempt at a military invasion of West Papua, while his Freeport friends in Washington tricked U.S. Pres. Kennedy into writing the “New York Agreement” selling the people of West Papua like cattle to Indonesia.

After Suharto came to power he gave the colonial minerals to Freeport (1967) & related American corporations; and he put the population of Java to work in factories making the cheap American clothes of the 1970s.

By time America moved its cheap factories to Mexico the people of Java had developed a taste for Colonial Profits of West Papua & other colonies, and too many people liked it.

Thanks for the comment. yeah, he was never a dumb dictator, for sure. He knew well how to give with one hand and take with the other. Many Indonesians wept at his death.