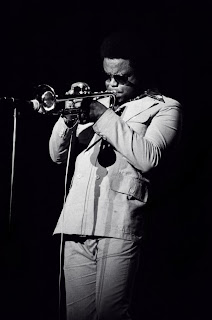 Freddie Hubbard died yesterday. The recordings I think are worth seeking out are his early Blue Note bop sessions, rather than his later fusion works with CTI (for which he's probably most famous). Hubbard played with most of the great jazz musicians on some of their most important records of the late 1950s and 1960s (John Coltrane, Sonny Rollins, Eric Dolphy, Ornette Coleman, etc.). But Open Sesame (1960), Reddie for Freddie (1961), and Hubtones (1962), all on Blue Note, are great records as a leader. I'm fond of one of his rarer records, 1969's The Hub of Hubbard, originally only a German pressing (MPS Records). It's a fine piece of retro-bop through the lens of the free jazz experimentation of the 1960s. Accessible and wise at the same time.