The Philosophy of Bar Identity 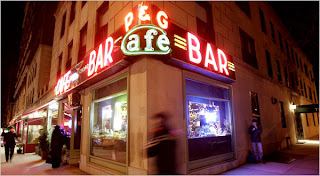 Photo: David Goldman, NY Times
If a familiar bar moves to a new location, does it retain any of its identity from its prior incarnation? The NY Times asks a philosophical question this morning.

But if drinking and dining have always been a moveable feast in New York, is charisma cartable? Can the character of everything from venerable pubs to palatial eateries migrate with their names and owners? This portability issue has gained new urgency in a season of economic disarray, when property owners are less willing to extend the leases of even the most beloved old-timers.

Setting aside the important cultural ramifications to the current economy, I think it's a set of questions with a fairly clear answer. A bar or pub is not solely its food and drink menu, its ownership and employees, and its clientele. It's also the place itself. Good bars become habituated and build a history of this habituation over time - that's their talent. Much of this history is physically manifested. Right? It seems that, once the basic requirements of food and drink are taken care of, it's the physical place itself and how its habitués have worn into the place over time that matters most to bar identity.

But, on the other hand, if a friendly and familiar bar, while remaining in the same physical place, suddenly took on a completely different clientele - say, shifting from a clientele of academics and artists and musicians to a clientele of club kids, or from long-term locals to the latest wave of hipsters - would we still say that it has retained its identity?

Maybe it's that the physical place must also have a relatively non-transitory clientele, at least in part, and that this combination of place and regularity gives the bar the core of its identity?
Posted by helmut at 10:10 AM

I believe you nailed it helmut. From my own EXTENSIVE research on Montana bars, renovation itself will drive away a clientel looking for a certain atmosphere, which in turn attracts a certain type of character.Move Cheers uptown and no one will follow.

If the renovation changes the atmosphere, but that's a separate question. What if the physical location changes, but the atmosphere, owners, menu, etc. all remain the same? Does moving a block south suddenly make it a new pub? Does going from 105 Main St to 116 Main St make all the difference in the world? That seems to be a rather bizarre definition of identity. That merely the change of address is sufficient to utterly compromise the identity is just plain odd.

It seems far more likely that the change of location is cojoined with other changes and it's that culmination that results in its being a "new" establishment. troutsky points out that going uptown from downtown can make a difference, but that also seems to change the atmosphere of the establishment. Not to mention it can make frequenting the establishment, which was previously no effort for a person who was going to be in the area anyway, an imposition. This could easily combine with other changes.

So, is physical location enough? No. That just seems trivial. Is a particular physical change of location enough, when coupled with all the other changes that would entail? Probably.

A bar is an abstraction without a particular location or clientele--like Starbucks or McDonald's, places we can drown our sorrows before we board our flights as well as after we land. Or like this blog and quality forums all around the World Wide Web. There's no there there, you can't go back, and you can't tap the same beer stream twice.

I once visited the outdoor architecture museum (Meiji Mura, in Inuyama) in Japan. It includes, among many other things, Frank Lloyd Wright's original lobby for the Imperial Hotel in Tokyo. These architectural structures, such as the lobby, are all set in a rolling landscape of lawns, each individually placed on its own plot of land. So you go on a walkway between lawns up to the front entrance of Wright's lobby.

This is a case of the entire place - the exact interior - moved to a completely different location. Apart from its museum-ness now and lack of daily use, it was utterly bizarre. The problem reminded me of Walter Benjamin's (and later, John Berger's) discussion of the historical and physical context of art constantly uprooted in late modernity as pieces are bought and sold and moved from one gallery or museum or home to another. What's the place-ness in question with the Wright lobby? It seems to me that a big part of it is its physical place. Of course, it's also its museum-ness - its new function as a static object whose sole purpose is to be gawked at.

I think the physical place does matter, and not in a solely trivial way. If the exact same interior moves to another site, is it the same bar? If the clientele changes, as I said earlier, probably not, as that's part of the identity. And this could be a function of the bar's role in a neighborhood (maybe now it's inconvenient for the previously regular patrons, etc.).

I suppose there's a bit of a brain-in-a-vat problem here. If you're in the exact same interior, but don't know that the bar is now in the Upper West Side rather than Harlem, then all other things constant, it probably makes no difference. But if you're in the exact same interior and do know about the move, it does seem to make a difference. And I think that difference is similar to what MT says above. Something like: histories (which are what really matter) are built into physical places as much as anything else.

I think each person builds history into a place his or herself in comprehending it. The mind's aim is to construct something objective--to construct the same thing that other imagined minds construct--but that's impossible. There's no collective unconscious, and we don't separate our every personal association with a place from our conception of what it is objectively, as we might write about it in a guide book. The conception we each have is likely to be similar in many elements to what many others have, especially if references to it in speech and writing have given the place a reputation, which is like a dossier about it, to which we all have a degree of access. Also even if our memories of what we heard or read are corrupt and incomplete, and even though I know it was my band and not your band who was playing when I saw the bartender making moves on my love, we can all share something if we just pretend we do, and so we do. It's real enough to legislate and litigate, just not enough to chart an orbit around.

Indeed, a classic conundrum about identity, my friend.

It is a little known fact that Plutarch's example of the ship of Theseus did not concern the actual ship of Theseus, but "The Ship of Theseus", his favorite stop for uzo in Athens and famous for their wet tunic nights. He was disturbed when they replaced the planks in the old bar top which he considered an essential feature of the place, a necessary element of the environment and mused about whether it remained the same establishment.

Hobbes, of course, picked up the question of identity in the early 17th century positing that it is contiguity through time that defines a being, with humans this continuous nature being embedded in the mind, particularly in terms of memory. His answer then is that if you can't remember what bar you were in, it really wouldn't matter since you could plausibly deny having been the one who did anything "you" did there.

In the 20th century, Kripke once again considered the question of establishment identity using the notion of a "rigid designator," although many commentators consider this to only be effective in terms of topless establishments.

I posit that at some moment between the mid 17th and late 19th centuries somebody wrote down the solution to the whole business and left it some place.

Steve (badum bum) G: depends on whether the planks were replaced as needed, as they've done (for it seems like eternity) over at "Neurath's Boat" [five-dollar cosmos from 7-8pm!], or wholesale.

I was thinking more along the lines of Aristotelian substance....

I suppose in entering a Frank Lloyd Wright lobby it's indeed intrinsic to my notion of the place, as well as to Wright's intention, that its boards and joists undergo such continuous regeneration as to ensure that my journey across the floor doesn't entail a sudden trip to the unfinished basement. Generally though a place does not seem to entail a maintenance contract or business model. We say the ancient Roman Coliseum is still there in Rome, for example, though the business isn't what it used to be. I think we often steer ourselves from the philosophical brink nowadays using "repurpose." As in, "Istanbul is Constantinople, repurposed." On the other hand, Iraq is just gone, and almost no one in the English speaking world seems to have noticed.

Is Kripke that guy who plays the 12 string?