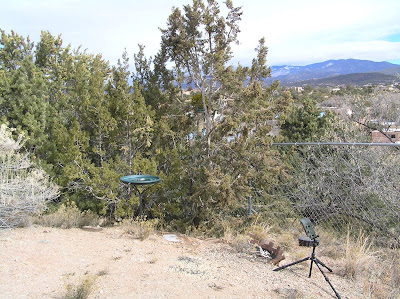 My Twitter friend @jfleck, who writes for the Albuquerque Journal, asked me to explain this birdcam I keep tweeting about and attaching pictures – mostly okay, sometimes good, sometimes terrible. So here goes.

Some long time ago, I used to write about nature in my yard. I was very lucky to get this house – in the foothills of the Sangre de Cristo mountains, just above the Santa Fe Plaza, in the piñon-juniper zone. What was even more lucky was that the previous owner hadn’t done much to change what was in the yard. Yes, he had some flowerbeds built up, with added real soil on top of our sand-and-clay Santa Fe formation, but that was only in one part of the yard, and I like growing flowers too.

But the rest was pretty much the way it has been for centuries. Maybe a little messed with; my neighbor planted Russian olives in what she thought was her yard, only to find that it wasn’t. The dead log for erosion control and those trees formed a center for one of my cactus gardens. I’ve been finding plants in the yard that aren’t showy enough to appear in wildflower books but aren’t in Weeds of the West either. And of course there are cactuses, many of which are afflicted with cottony cushion scale, which occasionally makes it into my house.

I’ve been messing with the yard, but in a way that I think is more or less consistent with its more or less natural state. I’ve added cactuses and other plants. Just below my deck, I’ve got a gaudy rock garden with rocks I’ve collected in New Mexico and cactuses. It’s not complete, nor are the flower beds, which were choked with cheat grass when I first came. I’ve removed most of the cheat grass, though.

I’ve always enjoyed birds, since I was a child. My mother had feeders in the back yard and helped me to identify the birds that came. So I have feeders and birdbaths, a station in the front yard and one in back. As I got into photography, I acquired long lenses and tripods and made some good photos at the Bosque del Apache and Bitter Lakes wildlife refuges in New Mexico. That was when my car was the only one on the refuge at sunrise, with not many more at sunset. That’s changed. Some of those photos were pretty good, including a lovely series of an American Bittern, but they’re on film, along with my ten thousand or so other slides, and I have no idea when I’ll scan them. I am thinking more and more that I will pack up a bunch of slides and hand them to someone who I pay to scan them. But for now, they remain in their storage.

When I managed environmental cleanups at the Los Alamos National Laboratory back in the 1990s, my sites included some of the explosives areas, where very few people had set foot since the 1940s. So the Lab’s ecology group was very interested in what was setting foot back there and placed some cameras to see. Those cameras were actuated by a laser beam and used, of course, film. The ecology folks would go out a couple of times a week to collect the film. We saw foxes, raccoons, and one photo was just various shades of tan. We figured out that it was a mountain lion checking out the camera.

So when I saw ads for my very own backyard birdcam, movement and infrared actuated, digital of course, I was hooked. Then I needed a more weatherproof tripod than I’ve had. Now I try to get it out in the yard every day, and I download it regularly.

My prize bird has been a roadrunner who showed up around Christmas a few years back, using my backyard portál as a refuge from an enormous snow. She stuck around for a while, and I fed her sardines, cat food, and ground beef. She came back last year. I knew it was her, because she left an indicator of her request for food right where I used to put her food bowl. Roadrunners are strict carnivores – she had no interest whatsoever in anything that wan’t meat.

The ads for birdcams show beautiful photos, every feather clear, the birds perfectly posed, but it turns out that using a birdcam is trickier than that. I’m a look-through-the-lens sort of photographer who hasn’t yet mastered looking at a little computer screen on the back of an apparatus. The birdcam doesn’t even have that. It has a little laser that you point at what you want to be the middle of the photo when you set it up. So you have to guess at what will make a good photo, while recalling whether this good photo locale is a place that the birds have come to in the past. You can, of course, just throw some seed and old bread on the ground and point the birdcam at that (which I’ve done today), but even that gets tricky with camera angles and weird perspective.

It does occur to me that I can place the birdcam right up next to hummingbird feeders when the little guys arrive in April.

So I’m learning, and I’m sharing that learning via Twitter. The photo up top shows my backyard bird feeding area. The birdcam is to the right, angled down.

Here are some of the photos it's taken:

Piñon jay. We have a winter flock of about 100 that settle around my yard every so often. 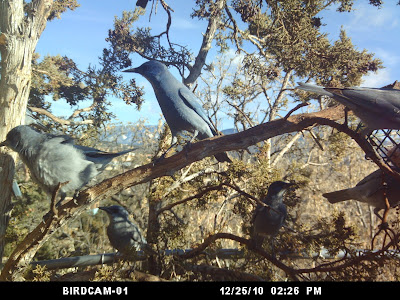 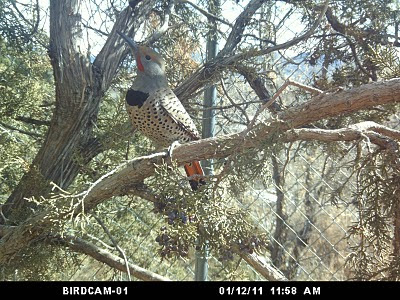 White-winged dove. The ground perspective on this one is quite distorted, so just look at the dove. 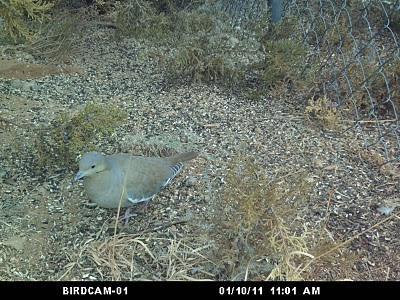 Red-breasted nuthatch. These have been my favorite birds since I was a little girl. The bird books place them as being fairly common in northern New Mexico, but I lived here a couple of decades before I saw one. And that year, they were on every tree on the mesas in Bandelier National Monument. Their numbers seem to vary enormously from year to year. This year is a good one; I've seen as many as four in my yard at one time, and I hear them frequently when I go out. Why do the numbers vary so much? One of the mysteries of ecology. Not a great photo, but the littler birds are harder to get. 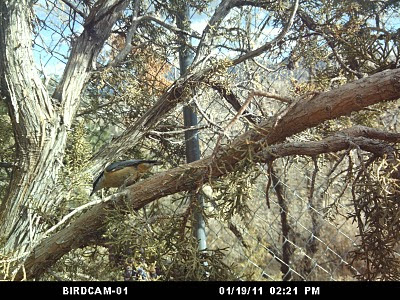 The birdcam has a flash, which I haven't used much. I put the birdcam out in the morning, or when I get around to it, and leave it. The doves come around the feeding areas and particularly like to sit on the birdbaths, tails in (ugh), as the sun goes down. Might use that for night animals when it gets warmer. 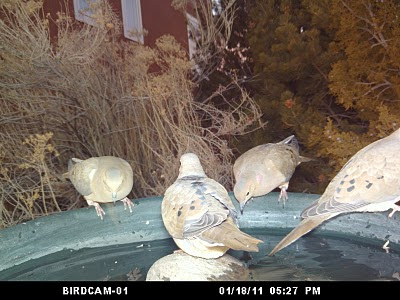 The evening before, I forgot to shut the birdcam off before I brought it in and inadvertently got this nice shot of the sun setting over Mount Taylor and the Cerros del Rio. 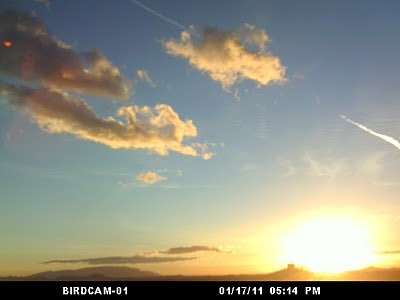 I'm not a conventional birder. Birds are of the moment, one of the things nature gives us to teach us to live in the now. So I don't keep a life list. Another Twitter friend, @seanpaulkelley, pointed out an article about what is happening to birding. It's true that people have made birding into something other than what I do. I haven't been to Bosque del Apache in a very long time; too many people making too much noise. Although dawn is still not bad, and I suspect that Bitter Lakes still isn't overrun.

But I have my own yard, which I can manage my own way. And my birdcam.

I'm finding that I've moved from blogging my yard to tweeting it. If you want to follow me and the birdcam, I'm @cherylrofer. I tweet other things, too, but not an enormous volume.
Posted by Cheryl Rofer at 1:58 PM