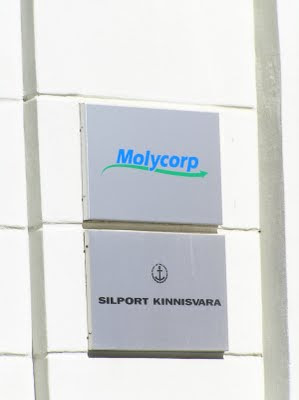 I took this photo the same day I took the others. That nameplate is on the same building that, the first time I entered it, greeted visitors with a science-fictiony machine replete with lights and gauges said to be for radiation screening. 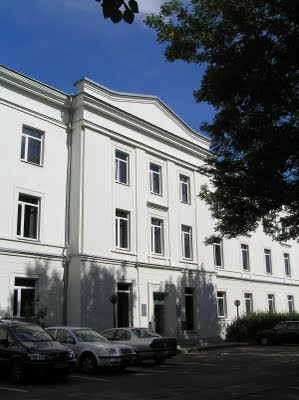 Molycorp, I am told, now holds a 90% share in Silmet. This makes a lot of sense. Over the past year, we’ve been hearing about China’s near-monopoly on the market for rare earths. Molycorp is reopening its Mountain Pass Mine in California. Silmet has been refining rare earths for a couple of decades now. I can’t find current numbers, but Silmet has, in the past, been the third-largest supplier of rare earths to the US market.

The plant is aging, and the equipment I saw a decade ago wasn’t of the highest quality. But Sillamäe has an experienced workforce whose wages are not as high as those in the United States. The plant already exists and is in compliance with environmental standards, a part of the development started in our NATO Advanced Research Workshop. Supply chains exist: I saw Russian tank cars of process chemicals in the Silmet yard. The equipment and buildings can be upgraded, although apparently Molycorp is planning to build a refining facility closer to its Mountain Pass Mine.

There’s quite a bit of information on rare earths and their uses at the Molycorp website, but nothing that I can find about the Silmet acquisition. Apparently Molycorp is the only western-hemisphere supplier of rare earths. So we will have China versus Molycorp.

It would appear that the acquisition of Silmet may be a stopgap measure for Molycorp until the California facility can be brought into operation. Given the continuing unemployment in Ida-Virumaa County, it would be a tragedy if Molycorp were to close the Silmet plant once its California plant is operational. We can hope that, with the increasing demand for rare earths in high-tech applications, both facilities will continue to operate and Molycorp will upgrade the equipment and employment in Sillamäe. But American industry is driven by profits, not worker well-being.

Environmental concerns also loom large. Molycorp will have to meet European Union standards, which are tighter than American standards. And parts of this article sound like Molycorp is learning from the waste-minimization practices developed at Silmet.
Posted by Cheryl Rofer at 2:31 AM