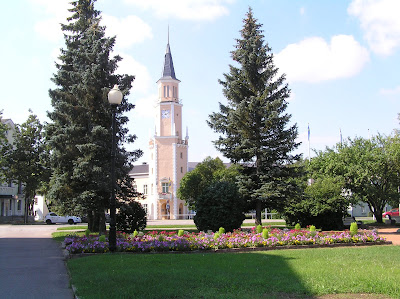 Sillamäe isn’t a normal Estonian town yet, but it’s getting there. This photo is of the town hall, just across the street from the park where the statue in my earlier post resides.

Sillamäe promotes itself to tourists as having a full range of Soviet architectural styles in a relatively small area. Here are Stalinist apartment houses along Mere Puiestee (Ocean Boulevard): 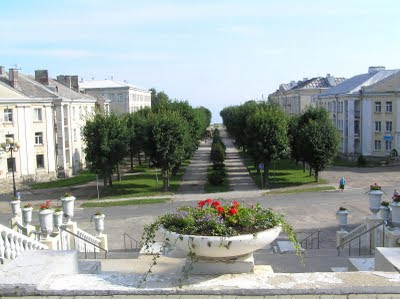 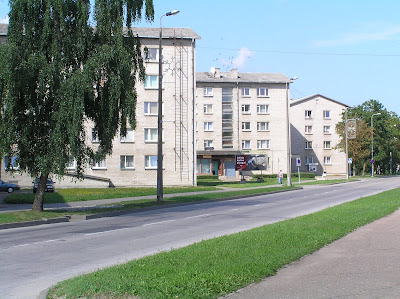 And Andropovian high-rises behind the market area. The area to the right was all there was when I first came to Sillamäe, but more modern stores are appearing on the left. 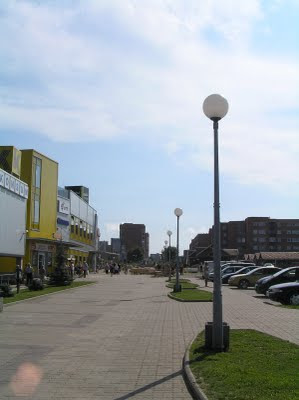 Jäätmehoidla
That’s what the Estonians called that tailings pond west of town, I eventually found out. Jäätme means waste, and hoidla is a place where stuff is stored. Veehoidla, for example, means reservoir, vee being water. So waste depository is not inaccurate, even if not conventional English.

The tailings pond has been remediated. Pilings were driven below the Cambrian blue clay, the shore was armored with boulders, the dam was cut back to a stable slope, and a deep trench prevents groundwater from flowing through the tailings. An engineered cover consisting of layers of sand, gravel, clay, and soil, arranged to shed rainwater, now supports an immense field of grass and presumably rodents hunted by the falcons I saw. The overall shape is domed to 13 meters higher than the steep-sided mesa I first saw. The waste lines from the plant have been cut off definitively; the plant now treats its wastes for safe disposal or further use. Here is the view from the foot of Mere Puiestee. 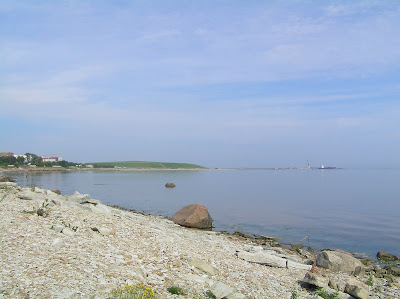 Sillamäe now has a port, which mostly handles cargo into and out of Russia. Oil and chemicals are the largest exports, and cars the largest imports. It also has a tax-free development zone for industry. Silmet, the company now operating the Soviet uranium plant to produce rare earth metals, is the largest. EcoMetal recycles 20,000 tonnes a year of batteries into 12,000 tonnes of lead alloys, plus scrap polypropylene and sodium sulfate, the product of battery acid which has several industrial uses. An area for trucks to wait until they get clearance to cross the border into Russia is also available. More photos at the port’s website.

As the remediation drew toward its close, port development started. There were a great many more holding tanks for chemicals and petroleum than there were on my last visit, and more were under construction. They are for holding petroleum and chemicals. A large area by the sea has been filled in for temporary storage of automobiles. The next step for the port is a container terminal. 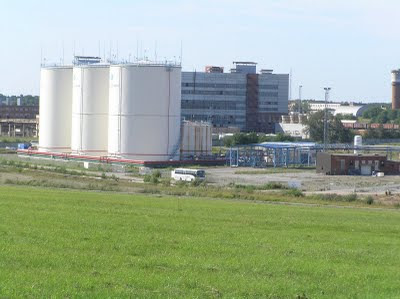 Russia is not pleased to have to ship cargo through Estonia and is developing a port on their side of the border, at Ust-Luga. After the Bronze Soldier was removed from central Tallinn in 2007, Russia stopped sending petroleum through Sillamäe for two years. That export has been resumed. Here are two articles on the Bronze Soldier incident, the second from an Estonian viewpoint (first, second).

For some contrast, here’s one of my earlier posts. My photos from before the remediation are all on film and at home.

Unemployment is high in Estonia and increased in the first quarter of 2011 to 14.4%. I don’t have a breakdown by county, but Ida-Virumaa County, which includes Sillamäe and Narva, has historically had much higher levels of unemployment than the rest of the country. Many more jobs are needed.

Update: I forgot to insert the top photo the first time around.
Posted by Cheryl Rofer at 10:09 AM

I did not know you could classify architecture as Andropovian (a word I really like) or Krushchevian. I bet the Krushchevian buildings are unkempt inside.

Also, in that first photo it looks like you fall off the world at the end of the road. What's on the other side?

Answering the second question first, it's the sea out there. The Sillamäe town website, linked in the first paragraph, has a photo from the same vantage point that shows the horizon. It was a funny day - it's been very humid the past few days - and the sea just blended into the sky.

The architectural styles are really quite different. The Khrushchevian buildings look awful on the outside, and the halls are sometimes dark and dank, but the apartments I've been in have all been spotless and as elegant as those who live there can make them. I've got a film photo from another trip that focuses on one window in one of thse buildings and the lovely plant and lace curtains in the window.