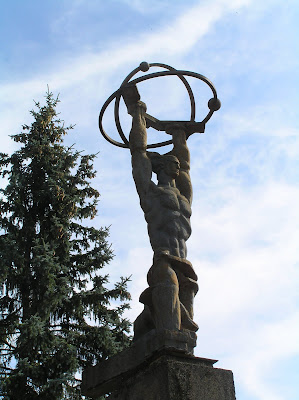 One of the reasons for my trip to Estonia is to check up on Sillamäe. Sillamäe brought me to Estonia for the first time in 1998.

Sillamäe was once a rather ordinary Estonian resort city. It is on the Gulf of Finland, about twenty kilometers west of the border city of Narva/Ivangorod. Wealthy Russians and the German nobles who ruled Estonia during the nineteenth century enjoyed the fresh sea air. I have a rather nice German etching of Die Badeort Silamäggi from the 1860s that I found in Stockholm. It shows large trees, a log building, and some happy-looking people wearing the clothes of the time. Its vantage point is probably in the park at city center that I walked through yesterday. I even saw some foundations in the ground that might have belonged to that bulding. Many of the trees were cleared in 1860, giving a nice view of the cliff and coast to the west.

I first heard about Sillamäe in 1992. I was given a brochure by a Los Alamos manager about a production plant for rare earth metals and oxides in Estonia. The brochure also said quite a bit about a “waste depository.” None of us could quite figure out what that “waste depository” referred to.

As I researched the site, I found other stories, surmises about Sillamäe. The most common, repeated in some of the DOE reports I consulted, was that it was a uranium enrichment site. Another was that it was a pit production facility. That was unlikely; the Soviets would hardly build the central parts of their nuclear weapons outside Mother Russia.

But still. Sillamäe was repopulated after World War II by Russians and others from the Slavic Soviet Republics and was closed to Estonians, a secret city. Occasionally, alarms were raised prohibiting swimming and fishing within some tens of kilometers of the facility. Scary, especially to the Estonians.

In late 1997 there was another contact, I was the only one at Los Alamos who knew anything at all about Sillamäe, and so in short order, I was on my way to Tallinn to a meeting of the Sillamäe International Expert Reference Group. A bus took us to Sillamäe, where it was obvious from the types of buildings and eqiupment that enrichment had never been part of what was done there. One dark sleety evening that January 1998, I worked with Mihkel Vierderma, vice-chair of the Estonian Academy of Sciences and Tõnis Kaasik and Anti Siinmaa of Ökosil Ltd., to develop a proposal to NATO for one of their Advanced Research Workshops.

The waste depository was the focus. A giant tailings pond a kilometer long and half as wide, the obviously poorly-constructed 23-meter dam not 50 meters from the Gulf of Finland, all of it sitting on the unpredictably weak Cambrian blue clay. It contained waste from the processing that the plant had done over the years. Rainwater leached metals, including thorium and uranium, through the pond and into the Gulf. At worst, the dam or the blue clay could give way catastrophically, dumping the whole thing into the Gulf. The purpose of the NATO workshop would be to discuss potential solutions.

When the Russians left Sillamäe, they left behind a roomful of classified reports. Ello Maremäe and Hain Tankler worked through those documents as part of Estonia’s joining the Nuclear Nonproliferation Treaty as a non nuclear weapon state. Sillamäe’s nuclear history goes back to just after World War II. Although, as Maremäe and Tankler note, a great many documents relating to Sillamäe still reside, classified, in Moscow, I think they’ve got the story pretty much right. I’m summarizing from their report.

Oddly, with all its mineral wealth, Russia has relatively few uranium deposits. At the end of World War II, the leaders of the Soviet Union knew they needed uranium to compete in nuclear weapons. One of the possible sources was a black shale found in northeastern Estonia. A mine was opened at Sillamäe, and a pilot plant was built at Narva. There had been an oil-shale rendering plant at Sillamäe, and a full-scale uranium ore-processing plant was built on that site. It’s difficult to separate uranium from black shale, but by 1952, Sillamäe had separated several tens of tons of Estonian uranium.

Production eventually shifted to higher-grade, easier-to-process ores from central Asia, Germany, and Czechoslovakia. Some of the input materials were ore concentrates. Some uranium was recovered from rejected reactor fuel elements. Processing this material, enriched in U-235, may have been the basis for rumors about uranium enrichment at Sillamäe. Or, like so many of the rumors I heard about wastes at Los Alamos, it may just have made a good story.

In 1989, the Soviets planned to move yellowcake production and uranium recovery from fuel rods from Sillamäe. And that indeed happened, but not in the way expected. By then, the Estonian government was moving away from status as a Soviet republic. Production at Sillamäe was converted to rare earth metals. That brochure I received in 1992 was part of its advertising.

The priority in 1998 was to deal with the tailings pond. The other countries around the Baltic Sea wanted its leakage stopped and the dam stabilized. Our proposal to NATO was successful, and our conference was held in early October of that year: people who could evaluate whether the tailings were worth mining (they weren’t) and people who had experience in remediating uranium mine tailings, and people who could help start thinking about how to end the emissions from the plant as procssing continued. We published a book of the proceedings.
Posted by Cheryl Rofer at 7:53 AM