Merry Christmas! and a Consideration of Rudolph the Red 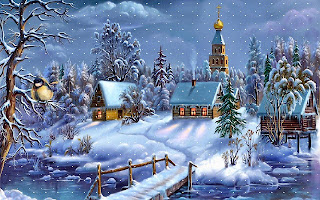 This picture, from one of the many sites making holiday-themed wallpaper available for free, is very much like an Estonian or Russian village. The building on the right is the sauna (why isn't it heated up?), and the bird is a great tit.

I was thinking about that extended pun on a popular Christmas song:


Commissar Rudolf and his wife are enjoying the holiday in their Moscow apartment. She looks out the window and says, “I think it’s beginning to snow.” He walks over to the window, turns to her, and says, “Rudolf the Red knows rain, dear.”

That’s how I learned the joke back when we were learning to duck and cover from nuclear armageddon rather than a crazed shooter in school. It’s a great extended pun, but when Republicans are the Reds and commissars are a thing of the past, nobody’s going to get it.

So it had to change.

You can explicitly set it back in the Soviet times:

An American and his wife were hosting one of their Russian friends in their hotel room back in the Soviet era. Rudolph, the Russian, looked out the window and announced that it was raining. The wife looked out and said “No, that looks like snow”. At which point the husband said “Rudolph the Red knows rain, dear.”

Back during the days of the former Soviet Union, a fellow by the name of Gerald Chattington had a friend in the Soviet Embassy by the name of Rudolph Nosov, who would drop by occasionally. One evening, Gerald and his wife, Peg, were sitting in the kitchen chatting when Gerald looked out the window and said, "Look, it's snowing." Rudolph looked out and said very quickly, "No, I think it is just rain." "I'm sure it is snow," insisted Gerald. "And I am just as sure that it is rain," said Rudolph. At this point Gerald turned to Peg to settle the argument. Peg looked out the window for a moment, then said, "What can I say? Rudolph, the Red, knows rain, dear."

This one is old, but moving out of the Soviet era; it makes use of the Russian = Red idea and vaguely recalls the Intourist minders/guides.

An America couple was being shown around Moscow one day, when the man felt a drop hit his nose.
"I think it's raining," he said to his wife.
"No, that felt more like snow to me," she replied.
"No, I'm sure it was just rain," he said.
Well, as these things go, they were about to have a major argument about whether it was raining or snowing.
"Let's not fight about it!" the man said. "Let's ask our guide, Rudolph, whether it's officially raining or snowing."
As their tour guide approached, the man said, "Tell us, Comrade Rudolph, is it officially raining or snowing?"
"It's raining, of course," he replied officiously.
But the woman insisted, "I know that it felt like snow!"
The man quietly replied, "Rudolph, the Red, knows rain, dear!"

Still Russian, but reaching back to the Czars.

There was once a great czar in Russia named Rudolph the Red. He stood looking out the windows of is palace one day while his wife, the Czarina Katerina, sat nearby knitting. He turned to her and said, "Look my dear, it has begun to rain!" Without even looking up from her knitting she replied, "It's too cold to rain. It must be sleeting." The Czar shook his head and said, "I am the Czar of all the Russias, and Rudolph the Red knows rain, dear!"

A good punchline will survive, even when countries don’t.

If you've read all the way to here, a reward in the form of Estonian Christmas music.