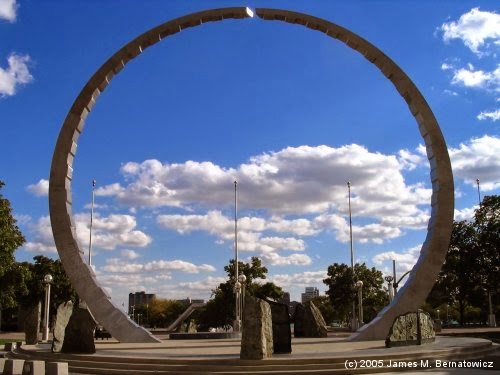 After fifteen years and more of studies on why science students drop science as a major, sometimes agonized as “the leaky pipeline,” we are now told that about half the students in all disciplines change majors in college.

“I think that what has happened is that we defined [attrition] as the problem, and that led researchers down a certain path” said one of the researchers.

Framing. People wanted to know why more students didn’t finish up as scientists and ignored that students may generally change majors in college.

Frederick Dahl follows the IAEA’s attempts to inspect sites in Iran that may have been used for testing related to nuclear weapons design. So his reaction to the agreement to the deal recently worked out with Iran was that it wasn’t enough because it didn’t give access to those sites. He quotes an unnamed diplomat who is not from one of the P5+1 countries

"Do we take the P5+1's relative silence on PMD as sign that it will only get lip service now and that the past is the past?" the envoy said.

"Or is it simply a sign that we need to calm the situation now in the present, thereby build some confidence, and then they will help ensure PMD and other past issues are fully addressed before this file is declared resolved?"

The thrust of the article is to emphasize the first. If the article had been framed along the lines of the second, it would have been quite different.

And then there’s Edward Snowden’s frame, that his concern was privacy and everything he has released is in the service of privacy. Sometimes it is formulated as Americans’ privacy, sometimes more generally. But the latest article based on the documents he obtained from the NSA would hardly seem to be about privacy. If the broadcasting hardware were inserted into everyone’s computers, perhaps; but that is not what the article says, although its frame strongly implies it. Another frame would be that this is a rather normal intelligence operation against expected targets: Russia, China, police and drug cartels in Mexico, trade organizations, and governments that might aid terrorists.

A pattern that might be seen in Snowden’s revelations and an alternative frame is that Snowden wants all spying (or all American spying?) to end; even governments’ (or one government’s?) surveillance of other governments is intolerable. This frame may be idealistic, but it is in the same category with “Gentlemen don’t read each other’s mail,” which disappeared a long time ago. It would also make for much less sensational articles, with less personal impact.

Everyone gets stuck in frames: the scientists who were concerned only about attrition of science students, a reporter who is focused on one aspect of the Iranian nuclear program, and the reporters who follow Snowden’s privacy frame.

A frame is like blinders: you don’t know what you don’t see. Time and money were lost on the search for why science students change majors; exclusive focus on Iran’s suspended nuclear program may hamper progress on other aspects; and I guess we’ll have to wait to find out the cost of reporters’ uncritical acceptance of Snowden’s “it’s all about privacy” frame.

Graphic from here.
Posted by Cheryl Rofer at 5:09 PM