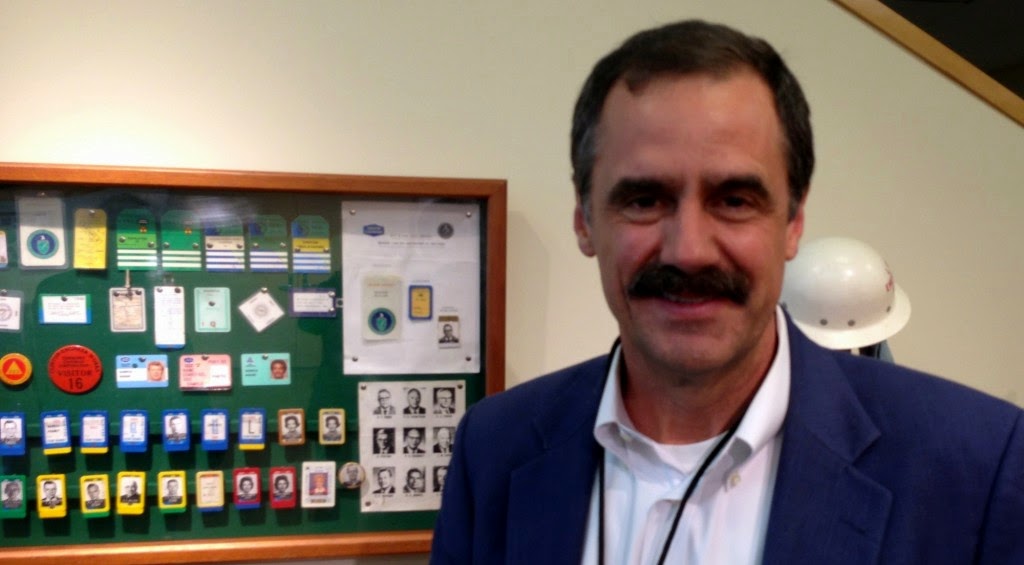 
The illustrative part of the photo, however, is the board behind the smiling mustached man. As I recall, security badges are not supposed to be photographed. Many times was I told to take off my lanyard or put my badge in my pocket for a photo. There's the whole panoply of colors and formats, laid out for all to see.

They're a bit blurred, though, so perhaps it's okay, particularly if the man is the DOE's Erhart. But, even blurred, they illustrate another problem, which may well contribute to the offenses listed in the letter.

The purpose of badges is to indicate, rapidly and clearly, whether a person is allowed access to a particular area. To that have been added credentials showing whether a person has had various types of training, including (at least back in the day) basic employee training, which includes things like the name of the company operating the organization. They form a sheaf on the lanyard, with the access badge on top.

That, of course, defeats the purpose, but imagine five or six or eight or twelve badges and credentials arranged around a lanyard, so you could see them all. Yeah, doesn't work so well, and likely to get caught in machinery, even an office printer.

The multiplicity of credentials stands in nicely for some of the regulations that may have been listed in that letter of deficiency; always popular as gotchas, with many possible infractions. Wrong colors, worn wrongly, training out of date, wrongly formatted.

That's a lot to keep track of, and the usefulness of the training might be questioned: after thirty years of working at Los Alamos, I had to take the basic employee training that had suddenly been mandated. Even before that, I had learned, all by myself(!) where the bathrooms were in many of Los Alamos's buildings, and my original orientation had been by Sam Glasstone and a few others who knew a bit of what they were talking about, but there was only one way to get that red credential for the sheaf on my lanyard.

When I started, we had three colors of badge, for the different levels of clearance, and the good sense to know who our co-workers were and thus who belonged in more sensitive areas, like glovebox rooms. But that was a long time ago in more ways than one.